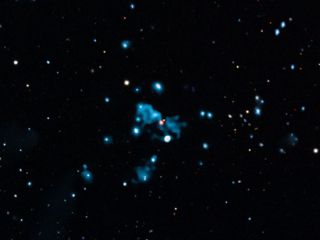 The diffuse blue object near the center of this composite image is believed to be a cosmic "ghost," called HDF 130, generated by a huge eruption from a supermassive black hole in a distant galaxy.
(Image: © X-ray (NASA/CXC/IoA/A.Fabian et al.); Optical (SDSS), Radio (STFC/JBO/MERLIN))

In thefirst detection of its kind, astronomers have found a cosmic "ghost"lurking around a distant supermassive black hole.

Scientiststhink that the discovery, made with NASA's ChandraX-ray Observatory, is evidence of a huge eruption produced by the blackhole and could give astronomers a valuable opportunity to observe phenomenathat occurred when the universe was very young.

The X-rayghost, so-called because a diffuse X-ray source has remained after otherradiation from the outburst has died away, is in the Chandra Deep Field-North,one of the deepest X-ray images ever taken.

The source,dubbed HDF 130, is more than 10 billion light-years away and existed at a time3 billion years after theBig Bang, when galaxies and black holes were forming at a high rate. HDF130 has a cigar-like shape that extends for some 2.2 million light-years. (Alight-year is the distance that light travels in a year, about 6 trillion milesor 10 trillion kilometers.)

"We'dseen this fuzzy object a few years ago, but didn't realize until now that wewere seeing a ghost," said team member Andy Fabian of the Cambridge University in the United Kingdom. "It's not out there to haunt us, rather it'stelling us something ? in this case what was happening in this galaxy billionsof year ago."

Fabian andcolleagues think the X-ray glow from HDF 130 is evidence for a powerfuloutburst from its central black hole in the form of jets of energetic particlestraveling at almost the speed of light.

The powercontained in the blackhole eruption was likely to be considerable, equivalent to about a billionsupernovas.

When theeruption was ongoing, it produced prodigious amounts of radio and X-radiation,but after several million years, the radio signal faded from view as theelectrons radiated away their energy.

However,less energetic electrons can still produce X-rays by interacting with thepervasive sea of photons remaining from the Big Bang ? the cosmic backgroundradiation. This process produces an extended X-ray source that lasts foranother 30 million years or so.

"Thisghost tells us about the black hole's eruption long after it has died,"said team member Scott Chapman, also of Cambridge University. "This meanswe don't have to catch the black holes in the act to witness the big impactthey have."

This is thefirst X-ray ghost ever seen after the demise of radio-bright jets. Astronomershave observed extensive X-ray emission with a similar origin, but only fromgalaxies with radio emission on large scales, signifying continued eruptions.

In HDF 130,only a point source is detected in radio images, coinciding with the massiveelliptical galaxy seen in its optical image. This radio source indicates thepresence of a growing supermassive black hole.

"Thisresult hints that the X-ray sky should be littered with such ghosts, especiallyif black hole eruptions are as common as we think they are in the early universe,"said team member Caitlin Casey, also of Cambridge.