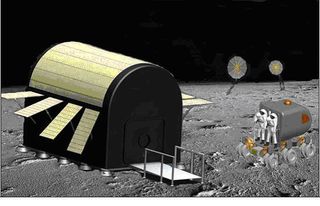 As NASA considers this issue in its plans for a return the moonby 2020, a team of college students has proposed a solution: giant blankets.

Engineering students at North Carolina State University (NCSU)designed a ?lunar texshield,? a layered blanket made of lightweight polymermaterial. The outer surface of the shield is a flexible array of solar cellsthat generate electricity. Underneath, a layer of radiationshielding deflects or absorbs incoming particles, to better protect astronautsin lunaroutposts.

The students entered their design in a NASA-sponsoredaerospace engineering competition for college students that will begin in June.

"We had many factorsto consider in developing this outpost cover ? not just being able to protect againstradiation," said NCSU engineering student Michael Sieber in astatement. "The product needed to be as lightweight as possible tofeasibly fit on the transportation module, and have the ability to be easilyerected by a minimum number of astronauts for immediate use once landing on themoon."

In June, Sieber and histeam will pit their blanket against designs conceived by 14 other teams, someof which might be used in future missions.

Unlike the blanket, some ofthe other designs in the works are more hush-hush. But a few teams have givenhints of their proposals.

Georgia Tech teams drew upplans for space-faring convoys of sorts that haul materials between Earth andthe Moon, filling up their tanks at orbiting fuel stations. And they had ideasfor efficient power grids and how to manage resources like air and water.

The Colorado School ofMines designed a small rescue rover as a lifeline for injured astronauts, andthe University of Maryland?s team has plans for a lunar version of ahelicopter.