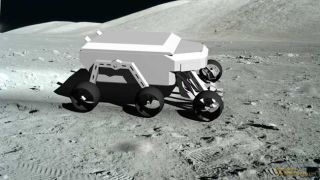 An illustration of a planned moon rover that could carry the pneumatic digger, which excavates lunar dirt by injecting gas into the ground.
(Image: © DigitalSpace/Jeroen Lapre)

NEW YORK - When humans finally set up residence on the moon,our lives there will look very different.

Since many of the tried and true tools we use on Earth willbe impossible to carry along, some scientists are hard at work inventing fromscratch the machines we'll need to make life possible on themoon.

One such example is building equipment.

Zacny's invention digs up ground by injecting gas into thedirt, thereby creating a high-pressure situation from which the gas naturallywants to escape. When it does fly upward, the gas' strong momentum ends uptaking dirt up with it.

Digging up the moon

In July 2008 Honeybee Robotics was awarded a contract todevelop tools that will help astronauts live and work on the moon as part ofNASA's Constellation program. Zacny has relied on the wisdom he gained workingin diamond, coal and gold mines in South Africa, as well as his doctorateresearch on extraterrestrial excavation, to devise creative methods for diggingup the moon, including the gas-blowing digger. Working with their NASAtechnical contacts, Rob Mueller and Greg Galloway, Zacny and his team hope tocreate tools that will one day prove their usefulness on the moon.

In detail, this so-called pneumatic excavation mechanisminvolves gas pumped into the ground through a thin tube encased by a widerhose. When the gas escapes, carrying along material from the ground, it travelsup through the hose to a storage container.

"It's kind of like a vacuum cleaner, but thereverse," Zacny said. Instead of using suction, the machine injects gasdown to draw material up.

The contraption weighs a lot less than conventional diggingtools, though it begs the question: Where will future moon-dwellers get the gasneeded to operate the machine?

One good source could be the carbon dioxide breathed outevery day by astronauts, he said. Another option is to burn any leftover fuelin the rocket thrusters on the moon landing vehicle, and collect the exhaust.

"When a spacecraft lands on the moon, it has a littleextra fuel left over, just in case you have to fly longer than youplanned," Zacny said. "Once you land it's a deadweight."

But burning this fuel to create gas is great way to powerthe pneumatic excavator, he said.

Once the device has sucked up lunar dirt, or regolith, thismaterial could be convenientlydiverted and used as a protective covering over homes (regolith is good forshielding from radiation). The dirt could also be processed to extract theoxygen bound up in its minerals.

In order to free up the oxygen trapped inside, regolith mustbe heated to high temperatures. Greg Mungas from Firestar Engineering, workingwith Zacny, proposed passing the material through a heat exchanger after it isextracted. Or, if the source of gas for the excavator is from leftover rocketfuel, then the exhaust will already be hot, and as it passes into the regolithit can heat the dirt up.

Since every bit of material that we carry to the moon addsexpensive weight to the spacecraft travelling there, engineers must design asmany thrifty ways as possible to get what they need from the moon and reuseresources.

"You're going to be recycling quite a bit," Zacnysaid. "It's like Lewis and Clark, living off the land."

For example, instead of carting up heavy water, astronautscould travel with hydrogen, and then add oxygen later. Since oxygen is theheavier ingredient in water, and it can be extracted from the surface, thisapproach saves precious cargo weight.

And once a store of water has been created for the lunarcolony, most of it can be recycled without having to create more from scratch.

Though engineers are well on their way toward preparing usfor life on the moon, some major issues have yet to be resolved.

"Something that we'll have to consider isradiation," Zacny said. "We can close ourselves in habitats, butradiation protection requires alot of shielding. We cannot solve this problem yet. Radiation can killus."

Moon dwellers will also have to contend with the ubiquitousdust on the surface of the moon, which gets into everything and can wear downjoints and connectors and prevent sealing off doors. It also poses a healthrisk to people, as it can cause breathing problems and is difficult to filterout of habitats.

Other difficulties may lie in the astronauts themselves, asopposed to the environment.

"You can have a lot of psychological issues,"Zacny said. "On the International Space Station you can see Earth. Ifthere's an emergency, in an hour and a half you can come home and be in thehospital. On the moon the Earth is farther away and you can feeldetached."

Why go to the moon?

While many scientists are busy planning humanity's future onthe moon, some people question whether we ought to be even trying to make itback to a place we conquered in 1969.

But Zacny argues the pursuit is worthwhile, not just initself, but for the opportunity to invent new technologies and prepare for oureventual quest to Mars. Plus, we can't help but want to try living on anotherworld besides Earth.

"We're going to explore. It's human nature," Zacnysaid. "It's just a matter of time before we establish some kind of base onthe moon."

And when we do, Zacny would sign up in a heartbeat.

"I would go right now. I wouldn't even go back homefirst," he said. "It's the adventure of a lifetime."