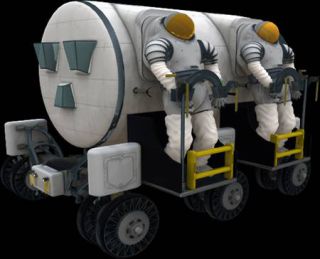 This image is a one of several conceptual visions of a pressurized rover for future moon explores under NASA's revised lunar plan and may not represent the final design.
(Image: © NASA.)

The nextastronauts to work on the moon will likely live in larger habitats and drivesporty new rovers capable of two-week treks, NASA officials said Thursday.

Rather thanassembling a lunar outpost over time from a multitude of small, separatelylaunched modules, NASA is now hoping to land up to three large habitats onfewer flights to build a beachhead on the moon, the space agency said.

Doug Cooke,NASA's deputy associate administrator for exploration systems, said that thespace agency's revised lunar plan calls for the launching of larger habitats tothe moon on unmanned cargo flights. That way, the first new lunar astronauts couldbegin to reap science rewards faster than if they had to haul smaller habitat sectionsand hardware to the moon on each flight, then combine them into a larger base tosupport long-duration expeditions.

"Wewant to get scientific return. We want to get information that will help,potentially, space commerce and we want to get international participation early,"Cooke told reporters in a teleconference. "All of these objectives we wantto address as early in the flights as we possibly can by getting the outpost upand running quickly."

Cooke andother NASA officials detailed the agency's revised lunar plan at the Space 2007Conference of the American Institute of Aeronautics and Astronautics (AIAA) inLong Beach, California. NASA aims to return astronauts to themoon by 2020 using its space shuttle successor -- the OrionCrew Exploration Vehicle and the Ares I booster -- as well as the Ares Vheavy-lift rocket.

"Thereis some great science to do on the moon," said Laurie Leshin, director ofsciences and exploration NASA's Goddard Space Flight Center, adding that futureastronauts will help better understand the moon's environment and interior.

NASA haseyed the moon's Shackleton Crater near the lunar south pole as a possible moonbase site because of its proximity to permanently lit and shadowed regions thatcould be key for solar power stations and the hunt for water ice. But Cookesaid that Shackleton is not the only candidate for a moon base, especiallysince the revised plan calls for mobile habitat modules that could move betweenscience targets or gather together in a sort of lunar spare parts depot.

Onceastronauts return to the moon, NASA does not expect them to simply stand aroundtheir landing craft collecting nearby rocks.

AstronautMike Gernhardt, NASA's lead for extravehicular physiology systems andperformance projects, said the agency is now planning to send a pair of pressurizedrovers that will allow spaceflyers to explore more of the lunar surface whileretaining the relative comfort of a shirt-sleeve environment.

"They'rebasically habitats on wheels," Gernhardt said, adding that the new vehicleswould be about the same size as the unpressurizedrovers driven by astronauts during NASA's Apollo moon landings. "Ifyou can picture this thing, it's kind of a combination between a spacesuit anda sports car."

Both roverswould be deployed together, each with a crew of two astronauts. If one roverfailed, all four spaceflyers could pile into the remaining vehicle to return totheir lunar base, Gernhardt said. Current plans call for a 5,000-pound (2,267-kilogram)pressurized vehicle with seats that fold into beds for longer trips.

The two-personrovers would be equipped to handle three-day, seven-day and two-week excursionson the moon with exterior-mounted spacesuits that could be donned by climbingthrough a shared hatchway, Gernhardt said. It could take just 10 minutes tostep into the spacesuits and onto the lunar surface, he added.

Shortjaunts could cover about 25 miles (40 kilometers) with the two-week tripsroving across 596 miles (960 kilometers) across the lunar surface, he added.

As to howmuch the rovers may cost, Gernhardt could only offer an estimate.

"Iwill only say that it will be more than a Ferrari," he said.