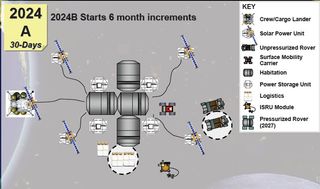 Moon Base would be built in increments over time, leading to permanent housing on the lunar surface for expeditionary teams. This drawing depicts a notional view of such an outpost. Image
(Image: © NASA)

HOUSTON,Texas - NASA's new goal of establishing a 21st century Moon base will requirebridge building while mending fences between space scientists and explorationtechnologists.

Spaceagency planners foresee a step-by-step, module by module buildup of a lunaroutpost, one that starts with four-person crews making several seven-day visitsto the Moon. That initial encampment will later be fortified by power supplies,rovers and additional housing.

Thefirst lunar live-in mission would begin by 2020, followed by 180-day stayoversto prep for journeys to Mars.

Asspace engineers hammer out a proposed lunar architecture, the call is coming forlunar scientists to aid in picking the best site for a base. Scientificdirection is also needed to define what human explorers can uniquely do on theMoon. Also, there's need for scientists to help catalog and evaluate how bestto utilize lunar resources so explorers can "live off the land" in support oflong-term visits to the Moon.

NASA'srobotic Lunar Reconnaissance Orbiter (LRO)--due to fly in late 2008--is seenas a key spacecraft that will chart the Moon as never before. Among its duties,LRO will hone in on site selection of a lunar outpost.

ButLRO is but one of a volley of Moon probes being readied for their respectiveliftoff. Next year, China's lunar orbiter--Chang'e 1--as well as Japan's SELenological and ENgineering Explorer (SELENE) will be bound for the Moon. India's Chandrayaan-1 is to follow in early 2008.

Dalesaid that scientists from the European Space Agency, India, Japan, Russia and the United States recently met to strategize robotic Moon exploration plans. Oneobjective of the gathering, she noted, was provided a technical basis forpotential cooperative observations using NASA's LRO with other internationalmissions.

Theintention of these joint discussions is to foster "openness and flexibility inall parts of this evolving lunar architecture," Dale added.

Movingoutward to the red planet, Hartman added, the robotic Mars Science Laboratoryis being readied for sendoff in 2009. That large rover will make the firstradiation measurements from the planet's surface, she said, fact-checkingmeasurements that are essential to the safety of any future expeditionary crewthat lands on Mars.

Overall,in Moon, Mars and beyond exploration, "we are going today with the human spiritin our robots and our machines and our telescopes. Tomorrow we'll go with humanbeings," Hartman concluded.

"TheMoon is a school for exploration...the springboard and stepping stone for therest of the solar system," said Paul Spudis, senior scientist at The JohnHopkins University Applied Physics Laboratory in Laurel, Maryland.

"TheMoon is a major scientific target--not only to learn about its own history andevolution but the history and evolution of the planets as well, Spudis said.

Amongthe many virtues of returning to the Moon, Spudis underscored its value as aplatform to look out into the universe.

"Itis possible to erect on the Moon instruments to do observations in areas of thespectrum and with capabilities that you cannot achieve from the Earth and even,in some cases, perhaps with free flyers in space," Spudis suggested.

Asexample, Spudis observed that the farside of the Moon is valuable scientificreal estate. Equipment planted there is shielded from low-frequency radio noisecrackling off the Earth. That being the case, he continued, the sky can bemapped at low radio frequencies with high payoff, yielding more clues about theorigin and evolution of the universe.

Spudissaid that one of the key goals of the Moon, Mars and beyond vision is to learnhow to live off the resources of space, specifically the assets of the Moon asthe first step. This skill is also dubbed In-Situ Resource Utilization or ISRUfor short.

"Fundamentally,this is something we don't know how to do yet...this is new territory. It'ssomething that NASA hasn't done. So there is actually a lot of science involvedwith this...it's not just engineering," Spudis said. "I call this appliedscience...and it's essential to both understanding how to do ISRU and how to useISRU to maximum benefit."

Sciencealso serves exploration by basically providing the information needed to golive on the planets, extract what's needed, and create a spacefaringcapability, Spudis concluded.

Significantfunds are required to get NASA's exploration train to the Moon, Mars and beyondon track. Meanwhile, the International Space Station and flying space shuttlesout to 2010 are big ticket projects too, demanding big cash.

Underscoringthe recent angst of space scientists seeing budget cuts, project slippage oroutright cancellation, "it was a shock to many in the science community...not allof them have recovered," Christensen advised.

Christensenurged a reexamination of the science community and its relationship to NASA."That needs to be patched up and some of these anxieties removed."

Thatmanagement model worked well, Hinners added, not only for Apollo, but severalfollow-on human spaceflight projects. "It has had a 'proof of concept'...if youwill," he told SPACE.com.

"Thereare major issues...and most of them frankly do come right down to the budgetissues," Hinners advised. "The total NASA program is under-funded, in my view,for the schedule and goals that they are currently committed to...and this addspressure."

Apollowas fueled by a reasonable budget, with plenty of money to foot the bill for additionalscience that was enabled by human exploration, Hinners said.

Still,the exploration program of today contrasted to Apollo is different.

"Thereis much more than science from day one," Hinners said, including preparationfor Mars and development of crew habitation facilities. "Science on a relativebasis plays a smaller role in lunar exploration today than it did in Apollo."

"Indeed,some of the science you want means bouncing around point-to-point in a sortiemode. But clearly there are other parts of science that require a lot ofdetailed work at a single site. Critical to the science community is siteselection for the outpost...where the total array of exploration goals can beaccomplished while maximizing the science return."