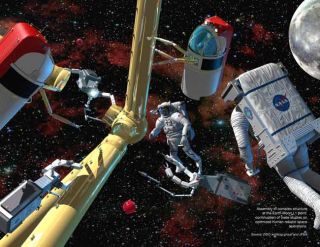 BALTIMORE-Humans will return to the Moon no later than 2020, paving the way for treks to Mars and beyond. When liftoff happens, astronomers don't want to be left in the dust.

But currently, they are split over the merits of lunar-based observatories compared with those in free space like the Hubble Space Telescope, which has been a boon to astronomy during its more than 16-year life in low Earth orbit.

"There's a great temptation to jump on the bandwagon completely as some people say the train's leaving the station and we've got to be on it. We are saying that might be a little naïve,"said Dan Lester of the University of Texas at Austin.

In the first of likely several discussions, a diverse group of astronomers met here last week to begin formulating a science guide of sorts for lunar-based astronomy.

"The philosophy that I came to this meeting with was I want to identify what are very important problems in astrophysics and then to examine whether or not the return to the Moon can somehow lead to progress in answering these questions,"Mario Livio, a senior astronomer at the Space Telescope Science Institute (STScI), said in an interview.

These discussions are coming at just the right time as NASA yesterday unveiled a strategy for exploration of the Moon, including the decision to pursue a lunar base to be constructed in incremental steps, with the first by 2020.

Placing large telescopes on the lunar surface could be fruitful since the Moon lacks clouds and any blurring atmosphere. While free space offers these attributes, the Moon also provides a permanent platform-a solid anchor-and its far side is free of radio noise.

The Moon's far side is a dream location to some astronomers who suggest its unique qualities could be a boon to science. The far side never faces Earth and therefore is free of radio noise. As every inch of our planet gets developed and the use of cellular phones, wireless computer networks, even garage door openers and digital television become ubiquitous, radio pollution is ramping up to critical levels.

Radio waves emitted by celestial objects are extremely weak. By the time they reach Earth-based radio telescopes the signals can easily be masked or contaminated by man-made interference.

But radio astronomers point out that the planned architecture for getting to the Moon and staking out livable quarters has shortcomings.

"When they start talking about all the infrastructure [on the Moon], well it turns out there are no plans to put bases on the far side of the Moon,"Lester said. "This idea that we're going to deploy this big telescope on the far side of the Moon, and magically we're looking for this plug to plug into the wall somewhere, that this power and communication is going to be there is not as justifiable."

Still, the idea of a radio observatory on the lunar surface has support.

Jacqueline Hewitt of the Kavli Institute of Technology at MIT is developing a Moon-friendly idea that involves printing metal onto sheets of plastic. The metal would act as dipoles for collecting radio waves. Once rolled up, the collectors could easily fit onto a rocket heading for the Moon and then easily be unrolled onto the lunar surface, Hewitt said.

"Just because it's possible doesn't make it optimal," Lester said.

Scientists led by Roger Angel, director of the Center for Astronomical Adaptive Optics at the University of Arizona, envision a deep-field infrared observatory at the lunar south pole using a giant liquid-mirror telescope. A once-shapeless pile of ionic liquid gets spun until it forms a perfect parabola for optics. On Earth these telescopes are limited to about six meters in diameter because the spinning whips up a wind that blurs the optics, while our planet's atmosphere can lead to distortion and absorption of light before it arrives at the telescope.

On the Moon, there's no atmosphere and no wind.

The light of a distant galaxy formed long ago and before it gets here, the wavelengths have stretched as the universe has expanded. Since this low-energy, long wavelength energy isn't visible, infrared detection is optimal. Angel said his team could start with a mirror as small as 6 feet (2 meters), work up to 20 meters and then possibly create a 100-meter scope on the Moon.

The telescope would have to remain upright, but if placed at one of the lunar poles could look at the same patch of space over long periods of time. Combined with a large aperture, the telescope would allow astronomers to view the first stars and their assembly into galaxies-a view unmatched by any current observatory on Earth or in space.

"I think the long-term character of the observatories is very important," Angel said. "Even if funding goes away and don't have any plans for twenty years, it's still there."

Some scientists argue that the Moon is a harsh place to work and humans have little to no experience working in lunar conditions. What they do have, Lester explained, is much experience working in free space, including building, operating and servicing giant observatories like the Hubble Space Telescope (HST). Hubble changed the idea of space science. "We came to understand that we could do the things in free space that we thought we could only do on the lunar surface," Lester said.

Here are a few other ideas astronomers are brainstorming for Moon-based science: