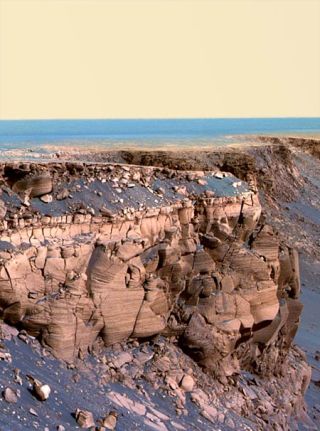 The resultsof that effort are now detailed in the May 22 issue of the journal Science.They've given scientists a clear view of some of the processes that have sculptedthe Martian surface, including evidence that water shaped much of the entireregion where the crater isfound.

Anotherseparate study, detailed in the May 21 issue of the journal Nature, lookedat the question of how liquid water might have formed on early Mars. The researchshows that even though the planet's surface temperature could have been wellbelow freezing, water might still have flowed there if enough minerals weredissolved in it.

Opportunity,trundling across the Martian surface for morethan five years now, arrived at Victoria crater 952 Martian days into itsjourney on the planet.

The roverhad previously explored the Eagle and Endurance craters, about 3.7 miles (6kilometers) away from Victoria. Mission scientists chose Victoria as the nextcrater to explore because "it was the biggest crater we could possiblyfind," said Steve Squyres of Cornell University, and the lead scientistfor the Mars Exploration Rover Project.

The scienceteam hoped that Victoria's depth ? of about 400 feet (125 meters) ? might shedmore light on the geology of the Meridiani Planum region, an area about thesize of Oklahoma.

Scientistshad already seen distinctive sediment layers in Endurance, as well as evidencethat water had been an active ingredient in shaping those layers. But Victoria offered a different perspective of the region because it is deeper than Enduranceand sits slightly higher, offering a chance to peek at different layers of theground.

During itstwo-year expedition there, Opportunitydrove to the edgesof promontories along Victoria's serrated edge, allowing it to look acrossto the next ridge and image the layers of sediment. The rover also drove downinto the crater to get a look at what was inside.

What it foundwere layers of the same sulfate-rich sandstone that Opportunity had found atEndurance, with evidence that water had weathered away minerals in the rocks, thenevaporated, leaving behind salts that eventually solidified into rock onceagain.

Thefindings show that water acted at both the Endurance and Victoria sites,suggesting that it did so across the whole Meridiani region. Squyres told SPACE.comthat this was probably "the most significant finding" of the Victoria expedition.

Opportunity also found "gorgeous, strikingevidence" of dune structures preserved in the rocks, Squyres said. Therehad been some signs of dunes at Endurance, but "Victoria really enabled usto nail that problem," he said.

Whiledriving up to the crater and around it, the rover also saw clusters ofmeteorites that Squyres and the other mission scientists think could befragments of the impactor that created the crater.

With itsexploration of Victoria completed, Opportunity is already on its way to itsnext target, Endeavor crater, 7 miles (12 kilometers) away.

"We'rehoping to find some very different things there," Squyres said.

Endeavor isa much older crater than Victoria and Endurance. The later craters were blastedinto the Martian surface after the sediment that Opportunity examined were putin place, "so what lies beneath [those layers] is still a mystery tous," Squyres explained.

Theimpactor that created Endeavor crashed into Mars before any of those sedimentswere laid down, so scientists are hoping it will give Opportunity a look at thebedrock that lies underneath the Meridiani Planum region. Essentially the tripwill be "like a whole new mission," Squyres said.

While Opportunity and other Martian probes have found ample evidence that liquid water onceflowed on the red planet, explaining how the water became liquid is a trickierprospect.

Mars is avery frigid place, with surface temperatures well below the freezing point ofwater. Geologists suggest that the features they see were created by flowingwater at a time when Mars was warmerthan it is now. But climate modelers can't add enough carbon dioxide (aplanet-warming greenhouse gas) to their Mars atmosphere models to get thetemperature high enough to keep water from freezing.

Thesolution laid out in the new study, which also used computer models, suggeststhat salts dissolved in the water could have kept the water liquid by droppingits freezing point (much like road salt melts ice on roads and sidewalks).

"Peoplehave been speculating about that for years," said Giles Marion, ageochemical modeler with the Desert Research Institute in Reno, Nev. Marion has looked at this issue himself, but was not involved with the new study.

The studyused chemical analyses done by Pathfinder, Viking, Spirit and Opportunity tosee if the salts they observed in the Martian dirt could sufficiently lower themelting point of water. It worked ? the salts could explain how water remainsliquid on a freezing cold planet.

The newstudy adds to the support for this idea, said both Marion and Jim Head of Brown University, who was also not involved in the study. But whether ancient early Marswas warm and wet or cold and wet is "still an open-ended question," Marion told SPACE.com.