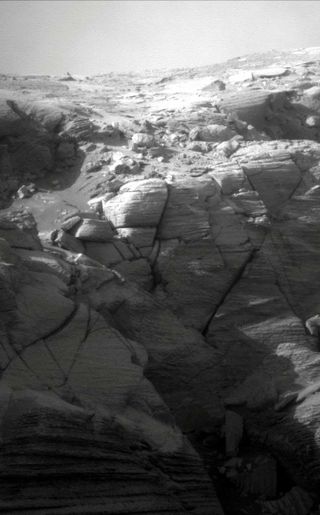 Things are looking up on Mars, including NASA's Opportunity rover as it scans a cliff wall that's part of the huge Victoria Crater.
(Image: © NASA/JPL/Cornell)

GOLDEN, Colorado — NASA's Opportunity Mars rover is getting an eyeful, wheeling itself ever closerto a cliff wall that's part of the huge Victoria Crater. A camera campaign isunderway, with early imagery producing anticipation within the rover science teamback on Earth.

"Whenthis stuff is all done and put together it's going to be amazing," saidSteve Squyres, lead Mars Exploration Rover scientist from Cornell University in Ithaca, New York.

Opportunityis about 20 to 23 feet (6 or 7 meters) back from the cliff face that's part of"Cape Verde." From there, the rover will collect high-resolution,panoramic images of rock layers in the promontory, taking a spectacularpanorama of the scene using the robot's PanCam camera system.

"Doingthis presents some interesting new challenges," Squyres explained."It's the first time we've ever looked ?up' at Mars like this."

And what isexciting the rover science team?

"We'veidentified some particularly interesting-looking targets in the cliff wall ?things that show sedimentary structures and textures that might be particularlyrevealing geologically. We're taking some ?super resolution' images of thosetoday," Squyres told SPACE.com in a June 27 e-mail.

Once allthat is done, the robot will be commanded to try and get even closer to thecliff — both to improve the resolution of images taken and to get theinstruments on the rover's robotic arm onto bedrock.

"Whetherwe'll be able to accomplish this or not, though, we don't know," Squyresadded. "The terrain here is very steep, and we obviously don't want toventure so close to the cliff that we're in its shadow. So we'll see."

Both Opportunity and its twin, Spirit, have been on Mars since January 2004. "This is oneof the most challenging things we've ever tried with either rover,"Squyres said.

Opportunity reached the rim of VictoriaCrater in Mars' Meridiani Planum region back in September 2007. It was alengthy drive to the impact crater from the rover's landing locale in January2004, roughly 3 miles (5 kilometers) away.

The rim ofthe crater is composed of alternating promontories, rocky points toweringapproximately 230 feet (70 meters) above the crater floor, and recessedalcoves.

The crateritself is big, some 2,428 feet (740 meters) in diameter — about three-quartersthe size of Meteor Crater in Arizona.

"Wecontinue to get tremendous results from Opportunity," noted WilliamFarrand, a research scientist at the Space Science Institute in neighboring Boulder, Colorado and a member of the Mars Exploration Rover science team.

"Wehave seen some very interesting sedimentary structures. Hopefully, from thiscloser position, we will be able to get some added detail on thosestructures," Farrand told SPACE.com.

Farrandsaid Opportunity's can read the writing on the cliff wall. That is, "arich geological record written in stone."

Meanwhile,at another area on Mars within Gusev Crater, sister ship Spiritis parked and hunkered down to conserve energy. The Martian winter solstice wason June 25, a time when the Sun is as low in the sky as it ever gets.

"Forthe time being, Spirit is basically just hanging out, charging thebatteries," noted a recent update on the rover's health from JetPropulsion Laboratory in Pasadena, California.