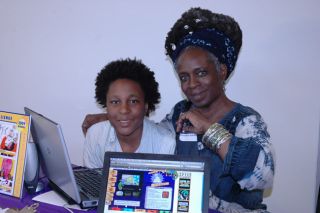 Kamau Hamilton with his teacher, Orundun DaCosta Johnson, Director of the Central Harlem Montessori Elementary School. Sounds of Johnson’s bracelets jangling against one another are posted at http://earthspeaks.seti.org/messages/83/.
(Image: © Barbara Vance)

Fornearly fifty years, the Search for Extraterrestrial Intelligence (SETI) hasused radio telescopes to scan the heavens for signs of alien technology. Butscientists still do not agree about whether we should reply to anextraterrestrial signal, and if we do, what we should say. To help answer thesequestions, the SETI Institute has launched Earth Speaks, a researchproject to collect messages online from people around the world.

"Earth Speaks invites people toponder the question, 'What would you say to an extraterrestrialcivilization?'" said Thomas Pierson, Chief Executive Officer of theSETI Institute in Mountain View, California. "By submitting text messages,pictures, and sounds from across the globe, people from all walks of life willcontribute to a dialogue about what humanity might say to intelligentbeings on other worlds," he explained.

Theoccasion for the launch was the visit to the SETI Institute by Kamau Hamilton,a sixth-grade student from the Central Harlem Montessori School, whose winningidea for the Kid's ScienceChallenge inspired the SETI Institute to expand Earth Speaks toinclude "Sounds of Earth." Kamau was a special guest at theInstitute's annual open house, Celebrating Science,on May 16th, 2009.

Nowall people can submit their messages to Earth Speaks, a website where theyalso enter labels or "tags" to help researchers categorize themessages. By studying the tags used by many different people, scientists willidentify the major themes that run through thousands of individual messages.That sets the stage for creating interstellar messages that begin to portraythe breadth and depth of the humanexperience.

Whenvisitors arrive at the website's homepage, they see a "tag cloud"that shows the most frequently used tags in the largest fonts. For example, thetags "greetings," "friendship," and "hope" areeach linked to two or more messages, and thus appear larger than tags used byonly a single person. By clicking on each tag, viewers can see or hear the fullmessage.

"EarthSpeaks uses technology of the twenty-first century to understand humanaspirations around the globe in ways not possible before," said JillTarter, Director of SETI Research at the SETI Institute. "This ispotentially a huge resource that can be explored to look for culturaluniversals."

Bytracking which country each message comes from, researchers can look for themesthat are common across cultures, as well as themes that vary from nation tonation. As additional messages are submitted and the tag cloud becomesincreasingly dense, a map of the world will be displayed, with "pushpins" showing where each message originated.

Chickensizzles on a grill, metal bracelets jangle against each other, a crow caws asan airplane flies overhead, and to the ears of Kamau Hamilton, the Earth hasfound its voice. These are a few of the sounds Hamilton recorded before andduring his visit to the SETI Institute. As a winner of the Kids' Science Challenge, aneducational program funded by the National Science Foundation, Hamilton hasbeen pondering and bloggingabout how to say something intelligible to a civilization separated by the vastdistances of interstellarspace.

Eachyear, the Kids' Science Challengeinvites third to sixth graders to pose questions to teams of scientists, whohelp the students answer their questions. Hamilton's question to the SETIInstitute team was, "How can we communicate with extraterrestrials if wedon't know if they have a language similar to ours and if we don't know theircommunication system? Is it possible to send communication symbols that mightbe found on both Earth and other planets?"

Asa starting point, Hamilton suggests identifying sounds that may be as familiarto extraterrestrials as they are to humans. "A common variable to theEarth and other planets would be physical environmental sounds," heargues. "Should we send sounds of our conditions, such as rain, storms,lightening, and the ocean?"

Ashis project has progressed, Hamilton has emphasized the sounds of hisneighborhood, such as the rhythmic chopping sounds of a street vendor preparing grilled chicken,the metallic rattling of histeacher’s bracelets, and the footsteps of classmateswalking down a staircase.

Duringhis visit to the SETI Institute, Hamilton also began creating a soundscape ofSilicon Valley. These recordingscapture elements of nature as well as technology, sometimes simultaneously,as in a sequence of a crow calling out, followed by an airplane on its way toMoffet Field, a local civil-military airbase.

Thougha few of the sounds recorded by Hamilton are being identified publicly with specialconsent from him and his mother, the identity of other participants in EarthSpeaks will remain confidential, following a standard protocol to safeguardprivacy.

TheSETI Institute currently has no plans to transmit messages into space."The question of whether we should send intentional messages to othercivilizations is too important to be answered hastily," said Pierson."Through Earth Speaks, the SETI Institute also hopes to foster anopen and thoughtful debate about the pros and cons of sending messages to otherworlds."

EarthSpeaks isfounded on the belief that first impressions matter, especially when there isno quick way to correct them — which could well be the case when yourpartner in conversation lives trillions of miles away. Indeed, the initialmessages we send to an extraterrestrial civilization could set the tone for aconversation lasting hundreds or thousands of years. It is only fitting, then,that as we ponder how we would represent humankind to another civilization, thedecision should be made by people around the world.