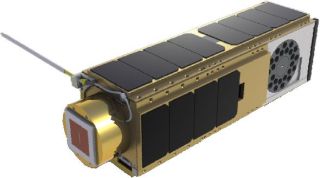 A computer drawing of the planned O/OREOS nano-satellite. The O/OREOS project is similar in concept and design to NASA’s PharmaSat and GeneSat nano-satellites.
(Image: © NASA Ames.)

Outer space is known to be unfriendly to biology, but it has been hard to determine just how long it takes for life and life-related compounds to be negatively affected. A new research project plans to monitor samples of organic compounds and living organisms as they orbit the Earth in a small satellite.

The hope is that this will give astrobiology researchers vital data about chemical evolution in the early cosmos, and about the survival of life that may be transported between the planets.

Above the protection of our planet's atmosphere and magnetic field, a myriad of particles and high-energy rays await the intrepid space traveler. This onslaught includes heavy ions, protons, electrons, gamma rays, X-rays and UV light. Life in this region of space also must cope with the effects of a lower-gravity environment.

"In the lab, researchers can duplicate certain aspects of this, but the combined radiation environment in space is very complex," says Tony Ricco from NASA's Ames Research Center.

The Organism/ORganics Exposure to Orbital Stresses (O/OREOS) nano-satellite will test how life and the components of life respond to this complexity. Ricco is a member of an engineering team in the NASA/Ames Small Satellite Division that is building the satellite. O/OREOS will carry selected organisms and organic compounds up into space and directly monitor the changes induced by the radiation and microgravity of the final frontier.

Because of its simple, inexpensive design, O/OREOS may be just a taste of what's to come.

Space-based biology experiments similar to O/OREOS have been performed before. Samples either have been flown in a return capsule, such as the BIOPAN experiments, or placed outside the International Space Station on platforms, such as with the EXPOSE facility. In these experiments, the samples are brought back to Earth to be analyzed after their exposure in space. In contrast, O/OREOS samples will

"The only thing that comes down in our case is data," says David Squires, the mission's project manager.

Over the course of the 6-month mission, onboard instruments will check whether chemical changes are uniform in time or perhaps correlated with other phenomena such as solar activity.

O/OREOS is similar in design to other nano-satellites that have flown, including GeneSat, which tracked the reaction of bacteria to microgravity, and PharmaSat, which is poised to launch on May 7 and will track how yeast behaves in space. The cargo on those experiments weren't exposed to the full array of space conditions, however, like in the O/OREOS experiment.

The 5-kilogram O/OREOS has a modular design made up of three 10-centimeter cubes. One of these cubes acts as the "brains" (radio and telemetry), while two other cubes carry the scientific payload.

The first cube will carry experiments to study how two types of microbes cope with the space environment.  One microbe is a common, fast-growing bacteria, Bacillus subtilis, which holds the record for surviving in space for the longest duration (6 years on a NASA satellite). The other is a slow-growing microbe, Halorubrum chaoviatoris, which thrives in the sort of briny water that may exist below the surface of Mars or on Jupiter's moon Europa.

Both of these "bugs" have been studied before in space, so the team has a rough idea of what to expect, says project scientist Pascale Ehrenfreund, who currently works from the Space Policy Institute at George Washington University.

The bacteria will be launched as dried spores and revived at different times during the mission with a nutrient-filled fluid.

O/OREOS will be in a low-Earth orbit (at an altitude of 650 kilometers) where its samples will experience 1/10,000th the gravity on Earth. This could affect how microbes get food and how their waste is carried away, says Wayne Nicholson, a science team member from the Kennedy Space Center and the University of Florida.

The radiation dose will be around 30 rads per day (which is roughly 30,000 times more than on a single intercontinental airplane flight). The growth rate and metabolism of the bacteria will be tracked by measuring the color of a metabolic indicator dye and via total light absorption.

To test if the bacteria are capable of adapting to life in space, mutant varieties of the two species will also be flown on O/OREOS, according to science team member Rocco Mancinelli of NASA Ames.

Cassie Conley, NASA's Planetary Protection Officer and the program scientist for the O/OREOS project, explains that learning about the evolutionary potential of microbes in space is important, because it could help us avoid contaminating other worlds with our biology.

The second cube will carry an experiment designed to measure space effects on four biologically important compounds. The list of molecular passengers includes an amino acid (a building block of proteins) and a polycyclic aromatic hydrocarbon (the most abundant organic species in space).

The compounds will be placed in four different micro-environments that will simulate conditions in interplanetary space, on the Moon, on Mars and in the outer solar system. Each sub-sample will be monitored through measurements of the UV and visible light that they absorb.

"The really cool thing is we measure every day, so we can for the first time give quantitative information about the day-by-day degradation of organic compounds," says science team member Richard Quinn of NASA Ames.

The survival rate of these molecules will help determine whether some of Earth's biochemistry might have been performed in space and later delivered by meteorites. Another science team member from NASA Ames, Andy Mattioda, says the data may also help in deciding which molecules are good biomarkers that can signal the existence of past or present life on another world.

Launch of the nano-satellite is planned for February 2010 from Kodiak Island, Alaska. O/OREOS is small and light, so it will be able to piggyback on another spacecraft's launch vehicle. This makes it a bargain, at a cost of just $2 million.

"We can do lots more of these," says John Hines, who helped lead the engineering team.

And there may be a lot more of these nano-satellites on the way. In 2008, NASA's Astrobiology Science and Technology Instrument Development program established a small payloads initiative, which seeks quick-turnaround science experiments that can fit on nano-satellites or as external attachments to larger space vehicles. The program selected O/OREOS as the first demonstration flight.