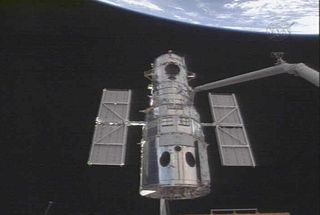 The astronauts who just arrived at the Hubble SpaceTelescope are at an altitude with a higher-than-usual risk from flying spacejunk.

In fact, since reaching orbit, the astronauts' shuttleAtlantis has apparently already sustained a slight impact to one of its wings, andthe agency is tracking another piece of debris that is expected to pass relativelynear the spacecraft later today. The slight impact is not thought to havecaused damage, and neither of these issues is of serious concern, NASA said.

While the astronauts are visitingHubble, where they plan to complete five spacewalks to revamp the agingobservatory, they will be exposed to greater potential impactsfrom orbiting trash than would be the case at other altitudes. Though arogue screw or tiny satellite fragment may not seem like a big threat, whentravelling at orbital speeds of about 20,000 mph, it can do a lot of damage.

The shuttle is at risk, too. If Atlantis were hit by spacejunk, the trash could easily puncture a hole in the ship that would render itunable to survive the trip home through the Earth's atmosphere. NASA hasdetermined that this shuttle mission facesa 1-in-229 chance of a catastrophic debris impact.

That's more dangerous than a usual shuttle mission to theInternational Space Station, which orbits at a lower and less crowded altitudeof 220 miles above Earth, compared to Hubble'slofty perch 350 miles high. The debris risk for a space station-boundmission is about 1 in 300.

NASA officials are confident the risk is manageable. And astronautshave said they accept the risk.

"We take it seriously, and we think we're in a positionthat it's acceptable to go fly," LeRoy Cain, deputy shuttle programmanager, said a few weeks before launch.

In case emergency does strike, NASA has a detailed rescueplan already in place. A second space shuttle, Endeavour, is perched on a sparelaunch pad at NASA's Kennedy Space Center in Cape Canaveral, Fla., ready tolift off to save the spaceflyers if needed. A four-member backup crew has beentraining on the techniques that would be needed to rescue astronauts maroonedat Hubble.

It would be a different problem were an astronaut on aspacewalk hit by roving debris. Though NASA's spacesuits are designed to shieldastronauts from the harshness of space, they would have a tough time resistinga zooming piece of junk. If a hole was punctured in an astronaut's spacesuit,the air could leak out and the person could die if not rushed back into thepressurized space shuttle soon enough.

However, NASA says the chances of an impact strike thisserious are very remote.