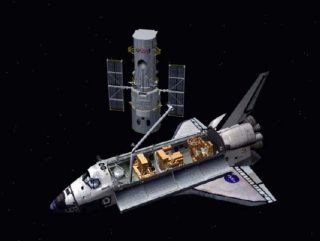 This image depicts space shuttle Atlantis capturing the Hubble Space Telescope during the STS-125 mission in May 2009.
(Image: © NASA.)

HOUSTON — After seven years circling the Earth all alone, the ailing Hubble Space Telescope is about to meet some old friends.

NASA's space shuttle Atlantis and seven astronauts raced toward Hubble on Wednesday for a planned midday rendezvous to begin a risky and complicated overhaul of the 19-year-old space telescope. Three of the Atlantis astronauts are returning to Hubble, including the shuttle's skipper Scott Altman, who led NASA's most recent service call on the observatory in 2002.

"I'm hoping it's as shiny as when we last left it," Altman told SPACE.com before launch. "I'm looking forward to seeing it out there."

Hubble's orbital neighborhood 350 miles (563-km) above Earth isn't the safest of places. There's so much space junk in the region that it is one of the top risks to Atlantis and its crew. The shuttle has a 1-in-229 chance of suffering a critical blow. That's a higher debris risk than on typical shuttle flights, but just within NASA's flight rule limits, agency officials have said.

NASA plans to fly Atlantis in special attitudes to reduce the chance of severe strikes from debris and micrometeorites, and the shuttle will retreat to a safer orbit as soon as it leaves Hubble next week. There's even another shuttle — Endeavour — primed to launch a rescue mission if Atlantis is hit so badly it cannot return its astronauts home.

Hubble, though, has had no relief from space debris and the harsh space environment. The astronauts and Hubble scientists have steeled themselves for pockmarks, loose insulation blankets and other wear and tear that may have stacked up over the years.

"It could be tattered a little bit," Altman said.

Altman and his crew will inspect Hubble after arriving to take stock of the space telescope's health. On Earth, a team of NASA engineers are doing the same for Atlantis to make sure the shuttle's heat shield has not been critically damaged by launch debris. The astronauts discovered some small dings in the heat shield Tuesday, but mission managers said the actual damage was quite minor.

Atlantis is due to arrive at Hubble at about 12:54 p.m. EDT (1654 GMT) as the shuttle pulls up below the telescope so astronaut Megan McArthur can reach out with a robotic arm and grab it. She will park the 13-ton Hubble, which is the size of a school bus, atop a turntable-like platform in the shuttle's cargo bay that gives easy access to the telescope's innards and exterior.

The astronauts plan to perform five ambitious spacewalks in as many days to replace basic items like batteries and gyroscopes, install two new cameras and attempt tricky repairs to two instruments that were never designed to be fixed in space.

There's no guarantee those fixes will work, even if the spacewalks go well, NASA has said. But if everything goes according to plan, Hubble will be more powerful than ever and live on through at least 2014, mission managers said.

Altman and Atlantis spacewalkers John Grunsfeld and Michael Massimino are all returning to Hubble. Grunsfeld - an astrophysicist and astronaut - is making his third trek to the observatory.

"I really feel like Hubble is kind of a friend, and I'm going to visit an old friend that I haven't seen in a long time," Grunsfeld said before flight. 'And it's going to be a little bit more weathered."