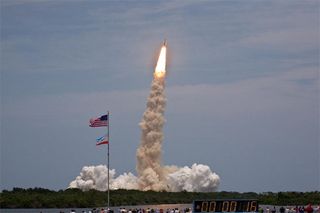 Under a dry, hot, cloud-washed Florida sky, space shuttle Atlantis roars off Launch Pad 39A at NASA's Kennedy Space Center in Florida with its crew of seven for a rendezvous with NASA's Hubble Space Telescope.
(Image: © NASA/Fletcher Hildreth)

?It?s amazing, but now of course come all the hard parts,?astrophysicist Mario Livio told SPACE.com just after Atlantisroared toward Hubble. ?We will be holding our breath over the next 10 daysto see that everything goes okay.?

Livio is a senior astrophysicist with the Space TelescopeScience Institute that oversees Hubble. He said he adores Hubble just like somepeople love cars that they?ve spent years fixing up and maintaining.

NASA launched Atlantis on a $1.1 billion mission to overhaulHubble for the fifth and final time. The shuttle is slated to arrive atHubble on Wednesday with the first spacewalk repair to follow a day later.

The 11-day flight was initially slated to launch in 2002 butwas waylaid by the Columbia shuttle tragedy, and then canceled outright becauseof its risk. NASA resurrected the orbital service call in 2006 and has primed asecond shuttle, the Endeavour orbiter, to launch a rescuemission in case Atlantis is damaged beyond repair. The most recent delay -a seven-month slip - cropped up last fall when a vital part broke on Hubble.

Ed Weiler, NASA?s chief of science missions, said there wasa tinge of sadness as he watched Atlantis rocket into space after itsrollercoaster ride so far.

?I?m happy to see the launch, but it?s sad knowing it?s thelast shuttle mission to the Hubble Space Telescope,? Weiler said after liftoff.NASA?s three aging space shuttles are due to retire next year and theircapsule-based replacement Orion is not large enough to haul the spare parts andnumber of people typically employed in a servicing flight.

Commanded by veteran shuttle commander Scott Altman,Atlantis? seven-astronaut crew will perform fivechallenging spacewalks to bring Hubble back to health. They will replacethe space telescope?s main batteries and gyroscopes and attempt to fix twoother instruments - Hubble?s main camera and a vital spectrograph - that werenever designed to be repaired in space.

?We?ll take our best shot,? Weiler said. ?Let?s allremember, these instruments are dead right now. If they don?t get fixed wehaven?t lost anything.?

If everything goes right, the repairs and upgrades to Hubbleby the Atlantis astronauts will extend the space telescope?s life through atleast 2014.

?This is a great start to a very challenging mission, andwe?ll see how the mission unfolds throughout the next couple of days,? saidNASA?s space operations chief Bill Gerstenmaier after launch.

The first order of business for Altman and his crew is toprepare for a day-long inspection of Atlantis? heat shield on Tuesday to scanfor dings caused by fuel tank debris. It was a chunk of fuel tank foam thatdamaged the shuttle Columbia?s left wing and led to the loss of its astronautcrew.

NASA said a few pieces of foamwere spotted falling from Atlantis? fuel tank just before launch, but noneappeared to strike the spacecraft.

Just after launch, Mission Control radioed the Atlantisastronauts to report that an initial look at video of their blast off found nocause for concern. The astronauts will use a camera at the end of Atlantis'robotic arm later today to try to get ahead on tomorrow?s inspection.

But for Livio and other scientists, the shuttle?s smoothlaunch had an added flair. Atlantis launched toward Hubble - one of the world?smostfamous telescopes - in 2009, which is the International Year of Astronomyto mark the 400th anniversary of Galileo Galilei's first telescope observationsof the night sky

?What could be more appropriate?? Livio said.