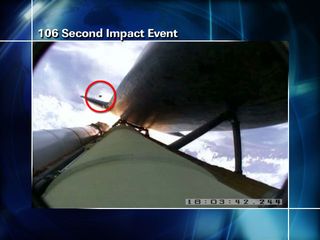 This view from a camera on the external tank for shuttle Atlantis shows a piece of debris just before it appears to strike the orbiter's starboard side during its May 11, 2009 launch toward the Hubble Space Telescope. NASA believes the damage is minor.
(Image: © NASA.)

HOUSTON - Astronautsdiscovered a trail of small dings in the vital heat shield of their spaceshuttle Atlantis on Tuesday, but NASA said the damage appears only minor and isnot expected to be a concern.

The dingswere caused by launch debris that fell from the shuttle?s external tank asAtlantis rocketed toward the Hubble Space Telescope on Monday afternoon. Astronautsspotted the damage while scanning Atlantis with an inspection poletipped with cameras and laser sensors.

LeRoy Cain,NASA?s deputy shuttle program manager, said that even though the damage toAtlantis appears minor, a crack team of image analysis experts is hard at workevaluating the pictures beamed to Earth by shuttle astronauts during anin-depth inspection today.

?This isnot something that we?re very concerned about but we want the team to do ournormal assessment and evaluation of it,? Cain told reporters here at NASA?sJohnson Space Center. ?And we?ll do that overnight tonight.?

NASA has Atlantis' sister ship, the shuttle Endeavour, ready to launch as soon as Monday in the unlikely eventthat Atlantis is damaged beyond repair and its crew needs to be rescuedin space. But Cain said that so far, nothing found on Atlantis has givenNASA any reason to even consider a rescue mission.

?The chancesof that being necessary are exceeding low,? Cain said.

Atlantiscommander Scott Altman and his crew are flying an 11-day mission to overhaulthe 19-year-old HubbleSpace Telescope for the fifth and final time. They are due to arrive at thespace telescope on Wednesday. Hubble closed its camera eye with a protective lid today to protect the delicate optics inside from debris during the service call.

Fiveconsecutive spacewalks are planned to install two new cameras and repair twoothers that were never designed to be fixed in space among other upgrades.

NASAbelieves the dings were scratched into the side of Atlantis about 106 secondsafter the shuttle launched into space. A camera on the shuttle?s attachedexternal fuel tank caught a piece of debris at that time, and wing-mountedsensors also recorded a slight impact then, too.

An imagereleased by NASA shows the dings as white pockmarks in the black tiles caused bya piece of debris that appears to have scraped across a 21-inch (53-cm) sectionof the heat shield. The debris made multiple hits on four of theheat-resistant tiles lining the forward right side of the shuttle just ahead ofwhere its body and starboard wing meet.

?At thispoint, what we?re interested in is, ?Is it critical damage and if so, what wouldwe do about it??? Cain said. ?Today, the answer is that it certainly doesn?tlook like it will be an issue for us.?

Mission Control radioed Atlantis late Tuesday to say the dings appear so mild that the astronauts will not have to take anextra look at them with the inspection pole later in the mission.

?Alright! You've got some happy [spacewalk] campers up here," Altman called back.

MissionControl did ask the Atlantis crew to keep trying to send images from a stubborndigital camera mounted to the spacecraft?s belly. The camera may have spottedwhere the debris came from on Atlantis? external tank, but is having troublerelaying the images back to Earth.

The astronautsalso plan to perform a standard second inspection of the shuttle beforelanding to be sure it hasn?t been damaged by space junk. The region of spacearound Hubble?s 350-mile (563-km) orbit is littered with space debris, adding aslightly increased risk to the shuttle mission.

NASA has beenon vigilant watch for any shuttle damage from launch debris since 2003, when apiece of fuel tank foam struck the shuttle Columbia led to its destructionduring re-entry. Seven astronauts were killed in the disaster.

Now,astronauts scan their shuttle heat shields at least twice every mission. Atlantisis carrying a standard suite of repair tools just in case they might be needed.

The blastfrom Atlantis? engines damaged some nitrogen and pressure lines, as well as a25-square-foot section of flame retardant material lining the trench beneaththe shuttle?s Launch Pad 39A, NASA spokesperson Allard Beuteltold SPACE.com from the Kennedy Space Center in Florida. The so-calledflame trench is used to funnel rocket exhaust away from the spacecraft duringliftoff.

Beutelsaid pad workers are expected to be able to repair the launch pad damage intime for the planned June 13 blast off of NASA?s next shuttle mission.