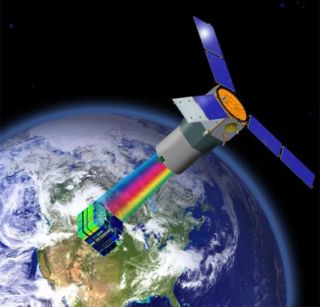 TacSat 3 is tuckedinside the pointy end of a Minotaur 1 booster, a space launcherformed by combining the two lower stages of a retired Minuteman missile and thetwo upper stages of the Pegasus and Taurus rockets built by Orbital SciencesCorp.

The 69-foot-tall rocket is scheduledto blast off at 8 p.m. EDT Tuesday. The launch window extends for threehours.

It will be the thirdMinotaur launch since 2006 from pad 0B at the Mid-Atlantic Regional Spaceportat Wallops Island, Va.

Around 50 workers havespent more than a month at Wallops preparing the solid-fueled launcher and itspayloads for liftoff, according to Jack Vieira, the TacSat 3 project manager atthe launch site.

Officials are not workingany major issues this weekend, but it has been a long road to launch for TacSat3.

Engineers examined theMinotaur's payload fairing to make sure Tuesday's $88 million launch would not sufferthe same fate as the February flight of a Taurus rocket that was broughtdown when its nose cone failed to jettison.

The fairing protects thepayload as the rocket accelerates through the lower atmosphere. The structureseparates in two halves a few minutes after launch.

"Certainly there was areason to go look at that," said Air Force Col. Scott Handy, missiondirector for the launch.

As it turns out, theMinotaur fairing shares very little in common with hardware on the Taurus.

"Those particularrails go along the base of the fairing as well as around the exterior so thatthe two fairing halves can actually separate at the time during themission," Handy said.

Orbital and NASA, thecustomer for the doomed February launch, are still reviewing the Taurus mishap,but the investigators briefed the Minotaur team on their interim results tohelp clear TacSat 3 for launch.

"We have no reason todoubt the expected separation of the fairing as designed," Handy said.

Conceived in 2004 andoriginally scheduled to launch in 2007, TacSat 3 has endured several years ofdelays due to problems with spacecraft equipment, including the satellite'sstar tracker, flight software and avionics system.

The 880-pound satellite ismanaged by the Air Force Research Laboratory at Kirtland Air Force Base, N.M.It is part of the Department of Defense's Operationally Responsive Spaceprogram, which aims to develop, test and integrate low-cost space technologiesonto tactical battlefields.

TacSat 3 will be the secondTacSat payload to launch. TacSat 2, launched from Wallops in 2006, completedmore than a year of operations last year.

Partners in the TacSat 3project include AFRL, ORS, the Army Space and Missile Defense Command, theOffice of Naval Research, and the National Geospatial Intelligence Agency.

Military leaders envisioninstruments like ARTEMIS will eventually be fielded in operational wartheaters, allowing lower-ranking tactically-minded commanders to rapidlyrequest and receive information on enemy troops and equipment.

The instrument was built byRaytheon Co.

ARTEMIS includes about 400spectral bands, while Hyperion can convert incoming light into 220 bands.

Hyperspectral sensors workby breaking light into its components, which allows analysts or softwareprograms to map the chemicals or minerals in an image.

Officials are notdisclosing the spatial resolution of the ARTEMIS imager, but managers said theinstrument will be able detect ground features as subtle as specific types ofpaint.

The satellite willparticipate in Army exercises later this year to showcase its ability toreceive commands from the battlefield, gather imagery, and downlink the resultsto soldiers in the field, officials said.

"When the satellitebreaks the horizon, the commander is able to uplink the location that they'reinterested in. The satellite autonomously calculates how to make thatcollection with the best advantage, collects it, processes the data on board,and compares the data that's collected to spectra that the Army is interestedin," Cooley said.

Programmers will load thespectra, or the signature of light reflected from objects on the ground, on thesatellite's computers so they can automatically compare target information tofiles stored on-board.

"There is a library ofspectra that are pre-loaded on the satellite. They might say, for instance,they're looking for a particular type of paint. We have the spectra of thatpaint on the satellite," Cooley said.

Commanders on the groundwill receive raw imagery or a text message with the latitude and longitude ofthe object's location, according to Cooley.

TacSat 3 should be able tocomplete these activities in less than 10 minutes during a single pass of thesatellite as it circles more than 250 miles overhead.

The exercises will helpofficials determine the military usefulness of highly responsive space systems,which could be implemented in large satellite constellations in the future toprovide global coverage.

"We'll just basicallysit back and watch how useful it was to them and what the impact was,"Wegner said.

The military expects TacSat3 will operate for at least a year.

The communications payloadwill gather observations from sea buoys and transmit the information to aground station to be relayed to warfighters.

"By the end of thatfirst year, we're going to have a really good assessment of the operationalutility of this kind of system," Wegner said.

The Army has long beenpushing for a satellite with tactical direct-tasking capability, but TacSat 3must prove its usefulness before the Pentagon orders an operational satellite,Cooley said.

"Our goal is that thetechnology will be of sufficient interest that the DOD will elect to moveforward and transition this type of technology into their toolbox, but thatremains to be seen," Cooley said.