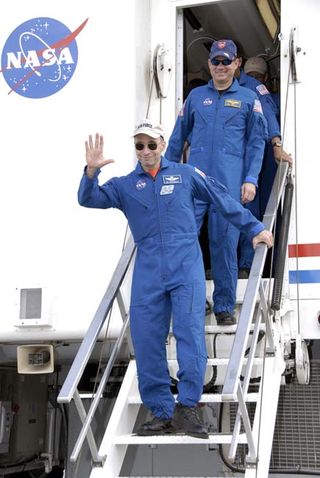 Theastronaut crew of space shuttle Discovery may be glad to be back on Earth, butthe spaceflyers will never forget their role in boosting the InternationalSpace Station to full power.

It was theviews of their handiwork that clinched it, five members of Discovery?sseven-astronaut crew told reporters after landingat NASA?s Kennedy Space Center Saturday in Cape Canaveral, Fla.

?It wasreally a sight to see,? Discovery skipper Lee Archambault said of his last eyefulof the space station.

The shuttletouched down at 3:13 p.m. EDT (1913 GMT) to end a 13-day mission that deliveredthe last pair of gleamingsolar wings to the space station. The result, as the astronauts saw afterleaving the outpost, was a stunning, symmetrical orbiting lab that is the largestmanmade structure in space.

?It wasjust an amazing view,? said Discovery pilot Dominic ?Tony? Antonelli as hetried to explain the feeling of seeing the space station with its new solarwings. ?I just had to look out the window and take it all it. It was justfabulous.?

Magnusreturned home to end a nearly 4 1/2-month mission aboard the station and willspend the next few weeks readjusting to Earth?s gravity.

?She seemedto be in very good spirits,? said Archambault, adding that Arnold stayed behindto keep her company when the rest of Discovery?s crew met with reporters.?She?s doing extremely well for someone who?s been in space for four months.?

Magnusspent 134 days living in space, most of that time as a flight engineer aboardthe space station. She was replaced by Japanese astronaut Koichi Wakata, wholaunched aboard Discovery on March 15, and told reporters before landing shewas looking forward to finally being outside again, as well as sushi, chocolatemilkshake and cheesy foods like pizza.

Theastronauts said they weren?t sure if Magnus, who earned a reputation as aninventive cook in space, had yet managed to order some of her hopefulfoods.

?We weretalking about that this morning though,? Antonelli said. ?So I?m pretty sureit?s still pretty close to the top of the list.?

Swanson andPhillips said they were proud of helping complete the space station?s powergrid by adding its fourth set of solar wings. The extra power is expected tohelp the station support a larger, six-person crew later this year.

ForAntonelli, Acaba and Arnold, it was their first career spaceflight and turnedup some new insights.

?I thinkthe whole living in 1 G thing is for the birds,? said Antonelli, as hereminisced of the weightlessness of space. ?Zero G, I think, is the way to go.?

Acaba, wholike Arnold is a former schoolteacher, said the experience of seeing the planetfrom orbit and watching lightning storms while floating in the calm of spacehas given him a new perspective.

?I?lldefinitely be looking at things differently now that we?re back on the ground,?Acaba said.

Discoveryastronauts and the space station crew also received an unexpected phone callfromPresident Barack Obama during their mission, one that surprised all of thespaceflyers.

?When thePresident of the United States takes time out of his day to show interest inwhat you?re doing, no matter who you are or what you are, it?s very humbling,?said Archambault, adding that it was an honor for his crew and that of thestation?s. ?It was very, very nice surprise.?