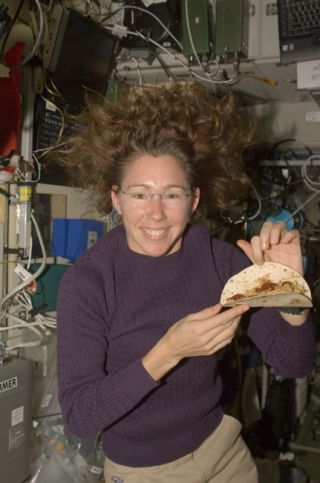 Astronaut Sandra Magnus, Expedition 18 flight engineer, poses for a photo with food which she prepared at the galley in the Zvezda Service Module of the International Space Station.
(Image: © NASA.)

Astronaut Sandra Magnus is headed back to Earth on the space shuttle Discovery after months at the International Space Station, where she dreamt up new ways to cook in zero gravity.

Magnus is wrapping up a 4 1/2-month mission as a space station flight engineer. During work hours, she served as part of the station's three-person Expedition 18 crew to keep the outpost running and perform science. But she filled her time off with experiments, including how to actually cook in space.

"You know, the trick is duct tape and zip lock bags for everything," Magnus, 44, told SPACE.com in a recent interview as she prepared to leave the station. "You can do anything with that."

Discovery is due to land tomorrow on a runway at NASA's Kennedy Space Center in Cape Canaveral, Fla. at 1:38 p.m. EDT (1738 GMT) to end a 13-day mission that delivered a new crewmember and final solar arrays to the space station. Engineers on Earth are studying images and data from a Thursday heat shield inspection to clear the spacecraft for landing.

For Christmas, Magnus and her crewmates made holiday-themed cookies. For the Super Bowl, she whipped up space salsa with sun-dried tomatoes, an ad hoc barbeque from baked beans and breakfast sausage links and chopped onions, and a dip made of cream of mushroom soup and creamed spinach.

"It's been a lot of fun cooking," Magnus said, adding that she enjoys experimenting with new foods when she's on Earth. "It's something I enjoy on the ground and so I planned ahead a little bit to supplement the raw ingredients."

But they weren't quick meals. In her NASA journals, Magnus describes cooking onions in the station's Russian food warmer for up to four hours until they were just right. Chopping juicy onions without gravity and holding the pieces down was a challenge, but a strip of tape and handy plastic bag nearby worked wonders, she wrote.

NASA shuttle food system manager Michele Perchonok said that astronauts typically don't do much hands-on cooking because of the amount of time and effort required, as well as the potential for mess. Magnus, she said, planned well in advance to make sure she had the right amount of oil and garlic in space.

"Sandy was extremely inventive in what she did," Perchonok told SPACE.com in a recent interview, adding that the astronaut detailed the steps in a PowerPoint file for posterity. "But it took a lot of time to do it."

Before leaving the station on Wednesday, Magnus turned her Expedition 18 flight engineer mantle over to Japanese astronaut Koichi Wakata, who replaced her as a member of the station crew to begin his own three month mission. Wakata — Japan's first long-term resident of the station — launched aboard Discovery to help boost the space station to full power by delivering its last set of U.S. solar arrays, which have since been unfurled.

When Discovery lands Saturday, Magnus will complete her second spaceflight and have spent about 134 days in space aboard NASA shuttles and the International Space Station since last year. Her crewmates will spend today testing the shuttle's systems to make sure Discovery is ready for landing tomorrow.

Magnus said that she's looking forward to being outside for the first time in months, and perhaps a meal of sushi, a chocolate milkshake and something with melted cheese, like a pizza. But she's also curious to learn how she'll react to gravity after living without it for so long.

"I'm very interested to see what happens when I get back to gravity," she told reporters earlier this week. "I've been exercising a lot. That's part of my normal lifestyle, even on Earth."

Magnus will return to Earth in a reclined position, rather than sitting up like her crewmates, to ease her reintroduction to gravity after the long months of weightlessness. She and her crewmates will set up a special recumbent seat in Discovery's middeck.

"It's going to be interesting," Magnus said. "I'm really looking forward to it."