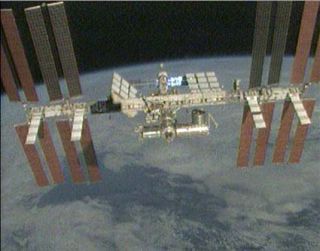 A video camera aboard space shuttle Discovery captured this image of the International Space Station shortly after undocking on March 25, 2009.
(Image: © NASA TV)

Thesnapshot spotlights the International Space Station as seen by a camera on the spaceshuttle Discovery on Wednesday. The shuttle?s crew had justundocked from the station after eight days of orbital construction to addthe last pair of solar wings to the outpost?s starboard edge.

The pricetag is the estimated total cost of the space station that senators gave to U.S.President Barack Obama when he spoke to the astronauts yesterday. NASA has questionedthe estimate, so it?s ?a little joke we have in Mission Control,? Alibaruhosaid.

The stationis the largest manmade structure in space and the product of internationalcooperation across 16 different countries. Its first segment launched in1998. The latest - the new solar wings - can be seen as the last set on the leftedge of this image (or right end to the station). They launched aboard Discoveryon March 15.

With thenew solar arrays, which alone cost about $298 million, the space stationmeasures longer than a football field across. The new solar arrays double theamount of power available for science on the station. The outpost is 81 percentcomplete and weighs nearly 1 million pounds (453,592 kg).

Each of itseight solar wings - four per side - have a wingspan of about 240 feet (73meters). The space station can be easilyspotted from Earth by the naked eye.

The stationis currently home to three astronauts, one each from the U.S, Russia and Japan.In late May, it is expected to double in crew size.

?It?s reallyjust incredible?it?s almost indescribable,? Alibaruho said. ?I just feel agreat sense of honor to be a part of it, and a great sense of pride in my team.?

DanHartman, head of the station?s mission management team, said he has spent 15years working on the international project and was amazed to see the outpostnow looking as only artist?s illustrations have shown before.

?You alwayssaw it in the pictures, and you just wondered if we were ever going to getthere,? Hartman said. ?There?s an extreme amount of pride in joy in seeing that.?