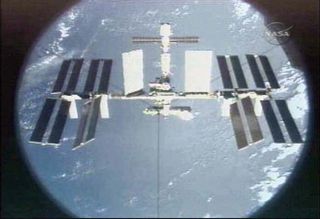 This view from a camera aboard the shuttle Discovery shows the ISS with its new starboard solar wings (far left) after the STS-119 undocked from the station on March 25, 2009.
(Image: © NASA TV.)

The spaceshuttle Discovery and its crew of seven astronauts cast off from theInternational Space Station on Wednesday after an eight-day visit that boostedthe orbiting lab to full power.

Discoveryundocked from the space station at about 3:53 p.m. EDT (1953 GMT) as thespacecraft flew 216 miles (347 km) above the Indian Ocean. A camera aboard theshuttle beamed views of the space station's new solar wings back toEarth.

?You lookclean and dry,? station skipper Michael Fincke told the shuttle crew afterundocking as they passed over Houston, home of NASA?s Mission Control. ?What abeautiful sight.?

Discovery?screw delivered the station?s lastof four U.S. solar arrays, unfurling them to their 240-foot (73-meter)wingspan to complete the outpost?s power grid. The new wings balanced out thestation, giving it two solar arrays per side, each with four expansive wings.

?We?re veryproud to have left the space station with more power,? Discovery commander Lee Archambaultsaid before leaving the outpost.

Discoveryslowly pulled away toward a point about 600 feet (182 meters) from the station,where pilot Dominic ?Tony? Antonelli flew it around the station in a victorylap so his crewmates could snap their first photographs of the outpost?s newlook.

?I?d liketo say thank you and your crew for an outstanding mission,? Fincke told Archambaultbefore the shuttle departed. ?You made the space station much better than itwas before. You gave it more power and symmetry, which is not to be underrated.?

Discoveryalso delivered last piece of the space station?s backbone-like main truss,which now extends more than a football field in length and can easilybe spotted from Earth by the naked eye.

The spacestation is now 81 percent complete and weighs nearly 1 million pounds (453,592 kg),with up to eight more shuttle missions planned to finish its construction by2010. NASA has reserved a ninth shuttle flight to overhaul the Hubble SpaceTelescope in May.

WhileDiscovery was docked at the station, astronauts installed a vital spare partfor the spacestation?s urine recycler during the joint mission.

Therecycler is part of a larger system to convert astronaut urine, sweat,condensation from the outpost?s atmosphere and other wastewater back into purewater for drinking, food preparation and other uses. The system is vital forthe space station to support larger crews for the long-term, and Discovery isreturning four or five liters of recycled water for analysis on Earth.

The shuttleis also bringing home about five months? worth of blood and other biologicalsamples from experiments, many of them conducted by NASA astronaut SandraMagnus, who is also returning to Earth aboard Discovery.

Magnus iswrapping up a 4 1/2-month mission to the station and was replaced by Japaneseastronaut Koichi Wakata, who will stay aboard the station for three months asJapan?s first long-duration spaceflyer.

As the twocrews bid farewell to Each other, Magnus lingered by the hatches betweenDiscovery and the station, waving some last-minute goodbyes to Fincke andfellow crewmate Yury Lonchakov of Russia.

?It?s beena very memorable time up here, and I guess I?m leaving with a sense ofsatisfaction that we did get so much done,? Magnus said before leaving thestation.

Discovery?sundocking comes one day before the planned launch of a new station crew andAmerican billionaire Charles Simonyi - the world?s first repeat space tourist -who is paying about $35 million for his second trip into orbit.

The newstation crew and Simonyi are due to launch toward the station Thursday aboard aRussian Soyuz spacecraft and arrive on Saturday, just hours before Discovery?splanned landing in Florida.