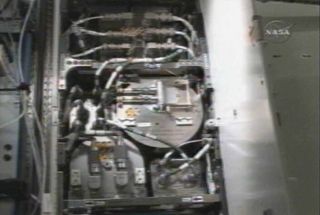 This view from a camera inside the ISS shows the station's Urine Processing Assembly, where astronauts replaced a broken component in the hopes of restoring its ability to turn urine back into drinking water.
(Image: © NASA TV.)

A glitch with the space urine recycler aboard the International Space Station on Sunday delayed a vital test for a system that converts astronaut urine back into drinking water.

Mission Control detected a lower than expected liquid flow into a urine processor as they attempted to recycle a batch of astronaut urine into pure drinking water in a test. The unexpected glitch initially forced astronauts to call off the attempt.

"This is a head-scratcher," station commander Michael Fincke radioed down to Mission Control. "We'll stand by to help unscratch our heads."

But Mission Control radioed up a fix a bit later - the replacement of a filter reservoir - and planned to conduct the urine recycling test late Sunday, though they did see a slightly sluggish flow in the new reservoir as well.

"It looks like we're having an interesting day," Fincke said.

The glitch was not related to an earlier malfunction with the urine processor's distillation assembly, a spinning centrifuge that begins the urine distillation process, which failed last December. Discovery shuttle astronauts replaced that faulty part on Friday and were today's planned test, which was slated to take about five hours.

The urine processor is part of a larger water recycling system designed to filter astronaut urine, sweat and condensation from the station's atmosphere back into pure water for drinking, food preparation, bathing and oxygen generation.

The sweat and condensation channels are working fine, but the urine processor broke down last December about a month after the entire system was delivered to the station.

Astronauts ran a dry test of the urine recycler, with an empty tank, on Saturday with apparent success. They said the replaced distillation unit exhibited none of the loud noise and vibrations that accompanied its broken counterpart.

"It sounded really nice and quiet," said NASA astronaut Sandra Magnus, who replaced the unit aboard the station.

NASA wants to restore the urine processor in order to fully use the station's water recycling system to support larger six-person crews later this year. Discovery astronauts hope to return recycled water samples to Earth during their mission to help engineers clear the system for human consumption.

Discovery's seven STS-119 astronauts have passed the halfway mark of their 13-day mission to the International Space Station, where the spaceflyers replaced one member of the outpost's three-person crew and unfurled the final pair of U.S.-built solar wings. The new solar arrays and their support girder completed the space station's power grid and backbone-like main truss, boosting the orbiting lab to its full length and full power.

The astronauts took a half-day off aboard the space station as they prepare for the last spacewalk of their mission on Monday. The shuttle is due to cast off from the station on Wednesday.