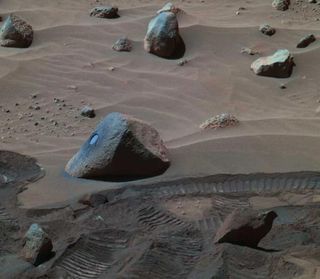 Mars researchers are hoping Spirit finds more rocks like "Wishstone" above, whose mineralogy is different from rocks found not just on the plains of Gusev Crater, but in the surrounding Columbia Hills as well.
(Image: © NASA/JPL.)

It's been a watershed year of science for the NASA Mars rover Spirit, a six-wheeled automaton that continues to probe the red planet's secrets as it clambers up the Columbia Hills.

"The remarkable story of the day is that these rovers are still making scientific discoveries," said Steve Squyres, the mission's principal investigator from Cornell University, during a Jan. 3 press briefing that marked the anniversary. "Spirit has moved into something totally different...a completely different geological territory."

After 2.4 miles (4 kilometers) of driving across its Gusev Crater landing site, Spirit is now gradually reaching higher into the region's Columbia Hills in search of more strange rocks like its recent science target "Wishstone." The rock's mineralogy is much different than that of its surrounding rocks and those of the Gusev plains.

Another recent target, a rock called Clovis, also intrigued researchers since it contained goethite, a mineral that only occurs in the presence of water on Earth.

"I think clearly the identification of [the mineral] goethite in the Columbia Hills and the indication that they have had significant water involved in their formation is the news [from Spirit]," said rover science team member Matt Golombek in a telephone interview. "We have found something that has clearly been wet."

Both Spirit and its robotic twin Opportunity were sent to Mars to unravel the planet's history of water, but while Opportunity hit paydirt early a t its Meridiani Planum landing site - thanks to orbital measurements and a hole-in-one landing - tracking the wet stuff's history at Gusev has been much harder for Spirit.

"We targeted landing sites that were specifically chosen to address the aqueous history on Mars," said Golombek, who spent three years working to pin down the two rover landing sites. "And what we found on the plains of Gusev Crater, throughout the first two kilometers, was virtually no water evidence."

Rover team members said Spirit's landing site was chosen because of its appearance, which suggested that Gusev Crater was once lake. But Spirit's science instruments recorded primarily basalt rocks, most likely pulverized in the impact that carved Gusev, strewn about the area, they added.

"Basically, the surface there was not what we would have hoped for," Golombek said. "It was difficult to come to terms with the fact that we were on this basalt plain."

But lucky for Golombek and other Mars researchers, Spirit has wheels.

The ability for Spirit and Opportunity to escape the immediate area around their landing site may be one of the MER mission's most attractive attributes.

While Opportunity has hopped from Eagle Crater to Endurance Crater and on to its heat shield, Spirit steady drove toward the distant Columbia Hills where it is climbing ever higher.

"[This mission] has revealed Mars as a place that one can truly get down on the surface and explore in a sense that you and I would do," Squyres told SPACE.com. "You can make a prediction of and than go over and find out if it's right."

Without their wheels, the twin robots wouldn't be rovers, and though Spirit has already felt some age pangs with one of its six wheels the robot has been keep its freedom of mobility, which researchers believe is key to its scientific success.

"That's what's so marvelous," Golombek said. "If you don't like what you landed on, you go to something that you do like."

Researchers do like the Columbia Hills at Gusev Crater.

The region has revealed older rocks with geology unlike anything seen at Gusev so far, with Squyres and his team anxious to determine how the chemistry of rocks may have changed in different areas of hills.

Researchers aren't sure what formed the hills, or whether some of their more interesting rock targets - like "Wishstone" - were formed by through an impact, volcano or other method.

"We want to identify these rock types based on their minerals," Golombek said. "We don't have a good view right now, and I want to nail it."