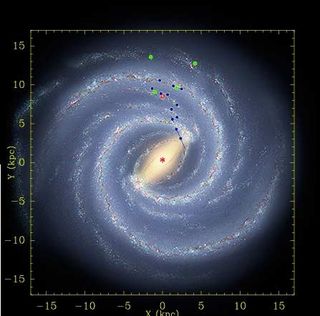 LONG BEACH, Calif. -- Scientists have dramatically revised the mass of the Milky Way, saying our home galaxy is half again as heavy as previously thought.

The Milky Way is now on par with the nearby Andromeda Galaxy in terms of heft. The Milky Way spins a lot faster than was thought, too.

These high-precision measurements, presented here today at the 213th meeting of the American Astronomical Society, indicate that the galaxy's speed at the position of our solar system (at a distance of 28,000 light-years from the galactic center) is about 600,000 mph (970,000 kph) to 100,000 mph (160,000 kph) faster than previously thought.

That increase in speed increases the Milky Way's mass by 50 percent, said team member Mark Reid of the Harvard-Smithsonian Center for Astrophysics, and that added heft makes our galaxy a much more serious contender against Andromeda.

"No longer will we think of the Milky Way as the little sister of the Andromeda Galaxy in our Local Group family," Reid said.

The new mass for the Milky Way is 3 trillion solar masses, Reid said, and that larger mass, in turn, means that the Milky Way exerts a greater gravitational pull that increases the likelihood of collisions with Andromeda or other smaller nearby galaxies.

The team used the VLBA, a system of 10 radio-telescope antennas stretching from Hawaii to New England and the Caribbean, to observe regions of prolific star formation across the Milky Way. Gas molecules strengthen the naturally-occurring radio emissions in portions of these regions, in the same way that lasers strengthen light beams.

The astronomers tracked these areas, called cosmic masers, observing them when the Earth was at opposite sides of its orbit around the sun. The apparent shift of the light can be measured against the background of more distant objects to triangulate their positions and movements.

The observations are also shedding light on the Milky Way's spiral structure, because cosmic masers "define the spiral arms of the Galaxy," Reid explained.

The measurements showed that "most star-forming regions do not follow a circular path as they orbit the galaxy; instead we find them moving more slowly than other regions and on elliptical, not circular, orbits," Reid said.

The elliptical orbits are the result of what are called spiral density wave shocks, which can take gas in a circular orbit, compress it to form stars and cause it to go into a new, elliptical orbit, reinforcing the galaxy's spiral structure.

The VLBA observations also yielded other surprises about the spiral structure.

"These measurements indicated that our galaxy probably has four, not two, spiral arms of gas and dust that are forming stars," Reid said.

Recent surveys by NASA's Spitzer Space Telescope suggest that older stars are found mostly in just two spiral arms. Why they don't form in the other arms is a question astronomers say will require more measurements and observations.

In separate news today, NASA released a striking new image that is the sharpest infrared view ever taken of the Milky Way's core. It reveals a new population of massive stars and new details about complex structures in the hot gas around the galactic center.