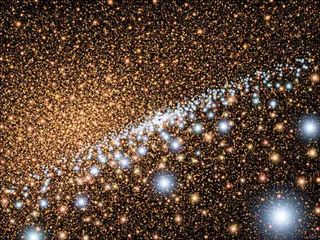 This artist's concept shows young, blue stars encircling a supermassive black hole at the core of a spiral galaxy like the Milky Way. The background stars are the typical older, redder population of stars that inhabit the cores of most galaxies (including our own). CfA astronomers caught two stars in the act of forming within a few light-years of the Milky Way's center. Their find demonstrates that stars can form at our galaxy's core despite the powerful gravitational tides generated by the black hole.
(Image: © NASA, ESA, and A. Schaller (for STScI))

Astronomershave long known that young stars could be found near the centerof the galaxy, but they had no idea how the stars got there.

The regionwasn't thought to be conducive to starformation because of the powerful gravitational tides stirred up by the 4million solar-mass blackhole at the galaxy's center. Scientists had figured that the tides wouldrip apart any gas clouds that could act as stellar nurseries.

Analternative explanation, that the stars fell in toward the galaxy's centerafter forming elsewhere, was thought to be a rare event.

But the newdiscovery, presented here today at the 213th annual meeting of the AmericanAstronomical Society, shows that the stars did form in place.

?Weliterally caught these stars in the act of forming,? said Elizabeth Humphreysof the Harvard-Smithsonian Center for Astrophysics in Cambridge, Mass.

Because thegas and dust between Earth and the galactic center blocks visible light fromgetting out, astronomers use infrared and radio wavelengths to peer into theregion.

Humphreysand her colleagues (at the Harvard-Smithsonian Center and the Max PlanckInstitute for Radio Astronomy in Germany) used the Very Large Array of radiotelescopes to search for water masers ? radio signals that signal proto-starsstill embedded in their birth cocoons.

The teamfound the proto-stars at seven light-years and 10 light-years from the galacticcenter (a light-year is the distance light will travel in a year, about 6 trillionmiles, or 10 trillion kilometers). Combined with one previously identifiedproto-star, the objects show that star formation is taking place near the MilkyWay's center.

The findingsuggests that the molecular gas at the center of the MilkyWay from which the stars form is denser than previously thought. The higherdensity gas makes it easier for the self-gravity of the condensing cloud toovercome the strong pull of the black hole and to collapse to form new stars.

"Wedon?t understand the environment at the galactic center very well yet,"Humphreys said. "By combining observational studies like ours withtheoretical work, we hope to get a better handle on what's happening at ourgalaxy's core. Then, we can extrapolate to more distant galaxies."