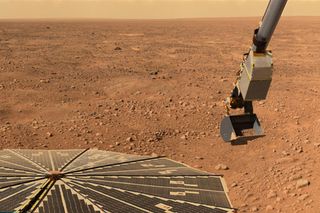 Mission controllers lost touch with thelander on Nov. 2. That "was actually the last time we actually heardform Phoenix," Goldstein said. The spacecraft has been studying the arcticsurface of the red planet for just over five months, since landing there May25.

During thecourse of itsmission, Phoenix scooped up samples of the Martian dirt and subsurfacewater ice at its arctic landing site and analyzed them for signs of theplanet's past potential habitability. Phoenix touched down on the northernplains of a region known as Vastitas Borealis. The area is at a latitude onMars equivalent to northern Alaska on Earth.

Phoenix successfully completed its missionobjectives at the end of its three-month primary mission in August. Themission's cost was ultimately about $475 million (up from the $420 million forits original three-month mission).

"NASA'sgotten what they wanted out of this mission," said Doug McCuistion,director of the Mars Exploration Program at NASA Headquarters in Washington, D.C., though Phoenix?s "demise is a little earlier than we'd hoped."

Phoenix?s big finding was to confirm the presenceof water ice under the surface dirt layer in the northern plains. Phoenix "fulfilled dreams of touching Martian water for the first time,"McCuistion said.

It alsofound that the dirt at the lander's location was more alkaline than the soilsampled by the Mars Exploration Rover missions (Spirit and Opportunity) closerto the equator. Phoenix's measurements also unexpectedly turned up signs ofperchlorate, a possible source of energy for any potential life that could haveonce graced the Martian surface.

"Phoenix has given us some surprises, and I'm confident we will be pulling more gems fromthis trove of data for years to come," Smith said.

The missionwas "definitely the thrill of my life," he said.

Thelander's power supplies have been steadily diminishing in recent weeks as the sundips toward the horizon with the approach of fall and winter to Mars' northernhemisphere. Phoenix went into its inactivesafe mode briefly on Oct. 28, when a dust storm obscured the sky andlimited the amount of sunlight hitting the lander's solar arrays. Phoenix restarted once the sun came up the following day.

For thenext few days, Phoenix would lose power or "brown out" at night, thenwake up again when sunlight hit its solar arrays the following morning. Mission engineers tried to turn off any unnecessary instruments and heaters to keep thebatteries alive, but "we were unsuccessful in keeping the batteries frombrowning out," Goldstein said.

The teamwas planning to send new instructions to the lander, but "unfortunatelythat high condition of dust lasted for some days there" and kept Phoenix from operating, Goldstein said.

Thesequence of events that led to Phoenix shutting down were "exactlyplay-by-play what we anticipated doing," Goldstein said, though they cameabout three weeks earlier than anticipated. Mission engineers had originallyhoped the lander would last through the end of November, acting as a weatherstation and using its camera to photograph the change of season.

Phoenixhas effectively ended all science operations, though the team will keeplistening for any signals from the spacecraft relayed through NASA?s Marsorbiters until solar conjunction (when the sun comes between the Earth andMars) begins in a few weeks.

The sun iscontinuing to go down about 5 minutes earlier every day at Phoenix's location.Come April 1, it will set completely beneath the horizon for three months. Thesun won't be high enough in the sky to generate enough energy to re-powerPhoenix until at least mid-October 2009, Goldstein said, though he think it'sunlikely the spacecraft will re-awaken because of the extremecold and carbon dioxide ice it will be subjected to.

Though noone on the team expects that Phoenix will once again live up to its name andrise again, there's always the "hope that the vehicle will surprise usagain," Goldstein said.