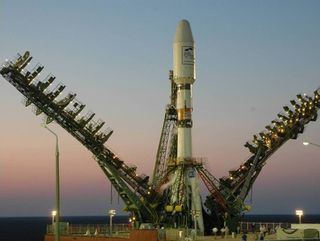 The rocket's payload, believed to be the first in a newseries of spy satellites, reached orbit about nine minutes later, according tothe Interfax news agency.

The new satellite series, called Persona, features updatedimaging technology and an extended lifetime of up to seven years.

The first Persona spacecraft was renamed Kosmos 2441 in theRussian military's nomenclature for satellites.

Saturday's launch was the first flight of the Soyuz 2-1brocket from Plesetsk. The updated version of the venerable launcher was firstflown from Kazakhstan's Baikonur Cosmodromein 2006.

The Soyuz 2-1b booster includes an advanced digital controlsystem and a more powerful third stage engine to increase performance.