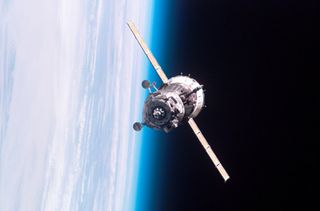 CAPECANAVERAL, Fla. ? The crew of the International Space Station will get ago-ahead next week to perform spacewalking inspections as part of a probe intoback-to-back ballistic re-entries by Russian Soyuz spacecraft.

"Imagine you drive aluxury car with fine shock absorbers, not feeling the road at all," saidPavel Vinogradov, who served on Russia's Mir space station and commanded anexpedition to the new outpost.

"And then suddenly,one of the shock absorbers breaks and you start feeling all the dents andunevenness of the road," he said. "It doesn't mean that your life isin danger. You can still safely drive the car."

A Russiancommission aims to pinpoint the cause of the re-entry difficulties. InOctober and in April, Soyuz crew capsules did not separate cleanly from attachedpropulsion modules prior to re-entering the atmosphere on the way to landing inKazakhstan.

That type of failure couldcause a Soyuz to plunge with its hatch, rather than its heat shield, facingforward ? a lethal situation with re-entry temperatures up to 3,000 degrees.

"Probably the thingthat concerns us the most is that the instrumentation and propulsion sectiondid not separate correctly from the spacecraft," NASA space operationschief Bill Gerstenmaier said.

Similar trouble almostincinerated a Soyuz during a January 1969 re-entry with cosmonaut Boris Volynovonboard.

NASA isconcerned because the Soyuz will be the only spacecraft capable of flyingto and from the station after the 2010 retirement of its shuttle fleet. Thespacecraft also double as emergency lifeboats at the outpost.

A ballistic re-entry is onein which the spacecraft relies solely on atmospheric drag to slow the vehicle.The U.S. and the former Soviet Union relied on the mode for early humanspaceflight. Yuri Gagarin and others flying Vostok spacecraft made ballisticre-entries. So did John Glenn and the rest of the Mercury astronauts. Gemini,Apollo and Soyuz capsules were designed to use aerodynamic lift for moregradual descents that reduce high gravitational forces on crews.

The ballistic mode servesas a backup for the Soyuz. Cosmonaut Sergei Krikalev says the capability showsthe Soyuz design is sound and robust.

Krikalev, who logged 803days in space and holds the world record for most time tallied in orbit, saidit guarantees that Soyuz will land intact.

That's not to say the ridewon't be sensational.

The trajectory increasedthe rate of deceleration and pressed Americanastronaut Peggy Whitson and her crewmates into custom-molded seats,crushing their lungs, making it hard to breathe.

"I saw 8.2 G's on themeter and it was pretty, pretty dramatic," Whitson said. She called it"an interesting ride."

An orbital module at thefront end is equipped with rendezvous and docking systems. A central capsule isknown as the descent module; crews strap into its seats for launch and landing.

The back of the spacecraftis an instrumentation and propulsion module. Its contents include steeringthrusters and guidance systems.

The Soyuz is designed soaerodynamic forces will break the modules apart in any case. But engineersstill fear a hatch-first re-entry.

Cosmonauts Sergei Volkovand Oleg Kononenko will venture outside the station July 10 to inspect thebolts on the Soyuz now moored at the outpost.

"I've made one trip toRussia to go understand how they are progressing with the analysis. They werevery open with me. They showed me all the data. They showed me thedrawings," he said.

"I saw the physicalhardware. I went through a detailed discussion of their engineering processes;they are the same as ours."

Yuri Karash contributed to this report from Moscow.