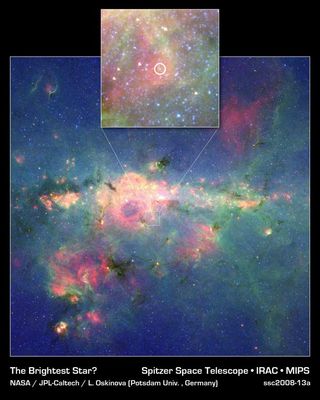 This image from NASA's Spitzer Space Telescope shows the 'Peony nebula' star, circled in the inset above, in the central region of our Milky Way. The blazing ball of gas is the second brightest star discovered so far in the galaxy.
(Image: © NASA/JPL-Caltech/Potsdam Univ.)

Aknown star has reemerged on the scene as the second brightest in our galaxy andmay in fact be the brightest.

The"Peony nebula star" shines as brightly as 3.2 million suns, butlurked in obscurity among interstellar gas and dust in the central region ofthe Milky Way — until now.

Otherstars are muchbrighter as seen from Earth, but that's because of their proximity. Bothdistance and dust served to shelter the Peony nebula star from Earth observers26,000 light years away.

Thenewcomer is thought to fall short of the current brightest star, Eta Carina,which blazes with the light of 4.7 million suns. But astronomers hold out thepossibility that the Peony nebular star may prove even brighter, if they couldjust get a better look at it.

Theyalso suspect that other bright talent may lurk in the star-packed region, whichsuggests a new star search is in order.

"Thereare probably other stars just as bright if not brighter in our galaxy thatremain hidden from view," said Lidia Oskinova, astronomer at Potsdam Universityin Germany.