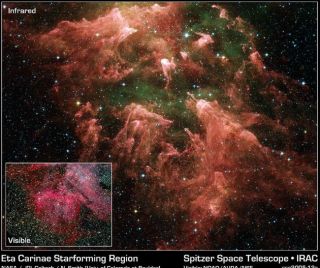 This false-color image taken by NASA's Spitzer Space Telescope shows the "South Pillar" region of the star-forming region called the Carina Nebula. Star embryos (yellow or white) are tucked inside finger-like pillars of thick dust (pink). Hot gases are green and foreground stars are blue. The massive star, Eta Carinae, is too bright to be observed by infrared telescopes, but hints of its downward-streaming rays can be seen at the top of the picture frame.

MINNEAPOLIS, MN - As they destroy the huge cloud that is their home, wildly energetic stars may be triggering the birth of the next generation. In a fabulous image released yesterday, these new stars are found sitting atop giant pillars of gas and dust.

The stellar nursery in this case is the Carina Nebula - a cloud of gas and dust that is 200 light-years in diameter. Located in the southern part of our galaxy, Carina is 10,000 light-years from Earth.

At the American Astronomical Society meeting here, Nathan Smith of the University of Colorado, Boulder, presented new data on this nebula from NASA's Spitzer Space Telescope.

Spitzer's infrared eyes can see through the dust that blocks much of the visible light, revealing the ruinous effects of massive stars in the cloud's center.

"This is an image that illustrates how massive stars destroy the environment that they were born in," Smith said at the press conference.

The massive stars create powerful stellar winds and piercing ultraviolet radiation that have cleared out an immense cavity in the nebula. But through the cosmic yin and yang, this destructive action appears to have given birth to a host of smaller mass stars on the edge of the cavity.

These baby stars - in a sense - block the wind and radiation from their massive forebears, so that a trail of undisturbed gas and dust forms in their wake. The resulting finger-like pillars of dense cloud material extend up to 10 light years in length.

The Spitzer image is reminiscent of the famous Hubble Space Telescope image of the Pillars of Creation in the Eagle Nebula.

The Carina Nebula, which contains roughly 100,000 young stars, is about 100 times more luminous than the much closer Orion Nebula. Some of these stars are tearing the nebula to bits.

"There is a fierce contest going on," Smith said. "On one hand we have these massive, first-generation stars trying to remove all of this gaseous material, and the young stars like those embedded in the dust pillars are trying to accrete the material to build themselves up."

The most damaging of the first generation is Eta Carinae, a variable star that puts out more energy than one million Suns. It is sometimes touted as the stellar heavyweight champ - with a mass estimated to be over 100 solar masses.

Winds blow off Eta Carinae's surface at four million miles per hour. During a spectacular event in the 1840s, the star shed the equivalent of 10 solar masses from its outer layers. For several years after this sloughing off, Eta Carinae was the second brightest star in the sky.

There have been several other eruptions in the star's past - leaving astronomers to suspect that this powder keg will go supernova sometime in the next thousand years.

Because of its violent history, Eta Carinae is believed to have been the prime sculptor of the remarkable pillars in the Carina Nebula. This is evidenced by the fact that almost all of them extend in the direction away from Eta Carinae, like flags wafting in the star's wind.

Each of the pillars is home to one or more recently formed stars. All this stellar ignition is almost certainly due to Eta Carinae's activity, Smith said.

Star formation is excited in some nebulae by shock waves that travel at the speed of sound - which is approximately 7,000 mph in a space cloud. This is not fast enough, Smith said, to explain the synchronized star formation in the Carina Nebula.

Instead, it is more likely that the ultraviolet radiation and wind from Eta Carinae and its fellow massive stars has pushed gas and dust out "like a snowplow," explained Smith. At the edge of the cleared cavity, material piled up, and eventually formed knots where new stars could form.

The speed of this snowplow is estimated to be three times the speed of sound, Smith said, so this mechanism provides a reasonable explanation for the timing of the stellar embryos in the Carina Nebula.

All this could have interest for research that is closer to home.

"We think our solar system formed in one of these [nebula] environments," Smith said.