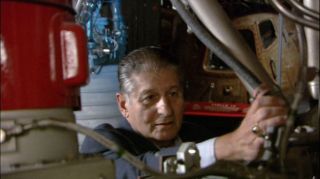 Sonny Morea inspects one of the F-1 engines created under the program he managed for NASA in "Moon Machines."
(Image: © Discovery Communications)

The starsof David Sington's first Apollo-inspired documentary, the 2007critically-acclaimed "In The Shadow of the Moon," were astronautswith famous names, such as Buzz Aldrin, Mike Collins, Jim Lovell and GeneCernan. The film, which makes its Science Channel debut on Friday, July 11 aspart of the network's second annual Space Week, is airing alongside the secondmoon landing-themed project by Sington's production company. This time, thespotlight is on the men and women who were behind the scenes, whose names —Joe Gavin, Bob Seamans, Eleanor Foraker and Sonny Morea — are not as wellknown or remembered.

"Thisis the story of the men and women who built the machines that took us to themoon," announces narrator William Hope at the beginning of each of the sixone-hour episodes of "Moon Machines," which premiered Sunday onDiscovery Communications' ScienceChannel and runs throughThursday. As Hope explains, for each of the 24 astronauts who flew to themoon, there were more than 16,000 engineers and technicians working to maketheir flights a success, for a total greater than 400,000 people.

As its namesuggests, "Moon Machines" organizes their stories by the hardwarethey worked to develop. Episodes are devoted to the Saturn V rocket thatlaunched men to the moon, the command and lunar modules that carried themthere, the navigation computer that kept the craft on course, the spacesuitsthey wore to protect them and the rover they rode on to cross the lunarsurface.

The seriesalso utilizes Apollo-era animations to explain what could be complicatedsubjects to a lay viewership. In one example, a cartoon illustrates theexplanation of lunar orbit rendezvous, the "only" means of sending U.S. astronauts to the moon, as was argued by engineer John Houbolt at the start of thelunar landing program. Another animation features "Andy Astronaut,"who demonstrates the unfortunate effects of walking on the moon without aspacesuit.

Not that"Moon Machines" avoids discussing complicated subjects. In arefreshing change from other recent efforts to present space history on film,"Machines" foregoes the more popular but often seen classic spaceshots for the more esoteric but just as engaging engineering films thatdocumented NASA's try and fail and try, try again efforts to perfect themoon-bound equipment. Occasionally, the odd astronaut is shown walking on thelunar surface, but only when it serves to show the outcome, for example, of thespacesuits' design.

As theseries' focus is more technical, one might guess it would be less interestingthan the astronauts' adventures shown in "Shadow." To the contrary,the workers' stories are as enthralling, if not more so at times, due in nosmall part to the passion and pride that translates through their words to thesmall screen even 40 years later. But this is more than entertainment, as theirrecollections provide an important insight into how we reached the moon at atime when our country has set its sights on returning there.

Take, forexample, George Phelps, the senior engineer at North American Aviation whenNASA decided that weight needed to be stripped from the Saturn V'ssecond stage. "Someone came up with an idea to remove one bulkhead. Thiswas the biggest challenge on that stage," explained Phelps regarding theinch-thick wall that would separate the fuels where two dividers had previouslybeen the norm. "That was the most difficult problem we had to resolve, butwe did it because engineers can do just about anything," said Phelps,displaying a wide smile.

Humornotwithstanding, "Machines" is also poignant, with the realizationthat many of the leaders who would have been ideal to interview are no longerwith us. ("Machines" addresses this by including historians andauthors among those on screen). This is especially felt by the inclusion of BobSeamans, NASA's deputy administrator when the Apollo program began, who passedaway the day prior to the series' premiere.

Thus,"Moon Machines" is not, as its title implies, about the hardware — although even space enthusiasts are sure to learn something new about theequipment — but as the opening narration reveals, the engineers in theirshadow.