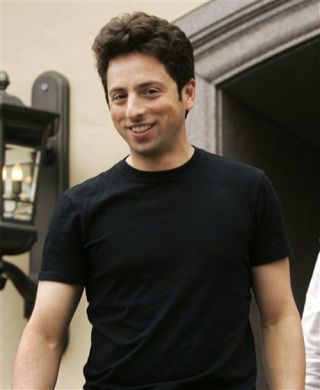 Sergey Brin, co-founder and president of Google, smiles at the annual Allen and Co.'s media conference in this July 12, 2007 file photo, in Sun Valley, Idaho. Google Inc.'s stock price sailed past $600 for the first time Monday, Oct. 8, 2007, extending a rally that has elevated the Internet search leader's market value by about $25 billion in the past month.
(Image: © AP Photo/Douglas C. Pizac file)

NEWYORK ? Space tourism took a leap forward as Virginia-based Space Adventuresannounced it had bought the first private Soyuz flight to the InternationalSpace Station in 2011, unlike its usual arrangement of wealthy individualsriding along with astronauts on Russian spacecraft.

GoogleCofounder Sergey Brin will also take a personal step into space as one of twospace tourists on the 2011 flight. Brin has already put down a $5 million downpayment towards his future flight as the first member of the newly established"Founding Explorer" group.

"Iam a big believer in the exploration and commercial development of the spacefrontier, and am looking forward to the possibility of going into space,"Brin said in a press statement.

Additionalmembers also have to pay a $5 million deposit to reserve one of the fiveremaining group slots, but will receive preferential treatment in choosingtheir eventual space missions.

SpaceAdventures unveiled its plans at a news conference this morning at theExplorers Club in New York.

Previousflights involved Space Adventures booking a spare seat for its "guestcosmonauts" on Soyuz missions scheduled to head to the space stationanyway. The new private Soyuz flights will allot two out of three seats toSpace Adventures customers, allowing a Russian commander to take the thirdseat. Such flights will take place in between official astronaut missions tothe space station.

Americancomputer game developer Richard Garriott is the next to fly in October to thespace station. The first U.S.second-generation astronaut has launched a "Space Challenge!" forUK students to design an experiment for him to perform during his spaceflight.Garriott also plans to conduct educational outreach such as podcastsand interactive webcasts while in orbit, and has commercial contracts worthhundreds of thousands of dollars to perform protein crystal growth experimentsfor pharmaceutical companies.

Garriottis paying $30 million for his trip, and had considered forking over anadditional $15 million to add a spacewalk to his orbital flight. However, hesaid in response to a question from SPACE.com that his chance would haveto wait until perhaps a second spaceflight — a trip that he also hopes topartially or fully subsidize with commercial activities performed on the spacestation.

"I'ma big believer that humans should be in space because it's valuable to be inspace," Garriott said at the event.

Somequestions had been raised regarding the safetyof the Soyuz spacecraft, after a bumpy ballistic descent for a three-personcrew that included South Korea's first astronaut.

ButGarriott expressed confidence in the Soyuz and said it was "statisticallythe safest possible way to get into orbit that exists today," adding thatthe spacecraft were originally designed for ballistic reentry.

SpaceAdventures has additional plans to expand to suborbital flights, possibly withone of the companies that participated in the 2004 Ansari X Prize. Even SpaceAdventures competitor Virgin Galactic received kind words.

SpaceAdventures also acquiredZero Gravity Corporation (ZERO-G) at the start of this year. ZERO-G andSpace Adventures Cofounder Diamandis stayed on as CEO of ZERO-G, but has alsobecome Managing Director of Space Adventures. The acquired company has provideda weightless flight experience using modified Boeing 727s to more than 5,000customers since 2004.

Andersonand Diamandis hope to fly 10,000 ZERO-G customers in 2010, and push the numberup to 100,000 over the next decade. ZERO-G's international expansion would pavethe way for future spaceports to launch suborbital and orbital flights.