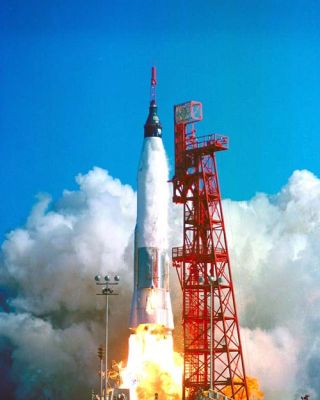 A rocket launch from Discovery's "When We Left Earth" series that premieres on June 8, 2008.
(Image: © Discovery/NASA)

Or so claims the advertisements for DiscoveryChannel's new six-part documentary/tribute to the first 50 years of U.S. spaceexploration, "When We Left Earth: The NASA Missions." The mini-serieswill premiere Sunday, June 8 with the first two, one-hour episodes followed bytwo more installments every Sunday.

But the claim isn't exactly true. Private andpublic efforts to share and preserve NASA's multimedia archives have led togrowing online libraries and unabridged DVDs. And what they have missed hasbeen seen by historians and space history enthusiasts over the course of thepast half century. There's no unseen footage, nor are there "secret filmvaults," as another of Discovery's ads professes.

And it is, to what should be the delight toanyone with a passing interest in space flight, let alone historians andenthusiasts. "When We Left Earth" presents the archival footage innew ways, both stylistically and visually, to mostly wonderful results.

In September 2007, Discovery partnered withNASA for the express purpose of celebrating the space agency's 50thanniversary. As the centerpiece of that agreement, Discovery was providedaccess to NASA's filmvaults (the not-so-secret vaults where the original flight film is held incold storage).

Discovery, at its own expense, remastered theaudio and video from all the key on-boards filmed by the astronauts themselves,ultimately converting more than 100 hours of footage into high definitiontransfers. They then donated that treasure trove of material back to NASA fortheir own use and to share with future generations of scholars and filmmakers.

Meanwhile, Discovery took their own work andcut "When We Left Earth," the first space exploration documentary tobe broadcast in HD (the series simulcasts in standard definition, too).

The results are nothing short of spectacular.Earlier this week, as astronauts Mike Fossum and Ron Garan made the 195th U.S.extravehicular activity outside the space station, they marked the 43rdanniversary of the first U.S. spacewalk by Gemini IV astronaut Edward White."When We Left Earth's" second episode, "Friends and Rivals"includes the restored and upgraded footage shot of White during that June 3,1965 EVA. It looks like it was shot by the same cameras used by Fossum andGaran.

Astronauts of all eras have said that theirphotography did not do justice to the bold colors and stark blackness of space.Now, as some have seen "When We Left Earth," those opinions arechanging.

"[It] captures what we see and what wefelt and what we experienced, the reality, the vividness, the emotional side ofit," said Apollo 16 moonwalker Charlie Duke in reply to collectSPACE.com about the series.

"By making this high definition[transfer] of the films we did and the photographs that we took, it is going tobe spectacular. People are going to awed," described Duke.

Was "When We Left Earth" only askillfully-edited series of NASA archival video clips, it would be worthwatching but what really makes it must-see-(HD)TV are the series of interviewsegments that are interspersed through each hour.

Set against a backdrop of stars, a parade ofastronauts, flight controllers, family members and more comment on themilestone flights on which they flew or were involved. In just the second-hour,11 historic figures appear, eight being Gemini astronauts (half of the totalwho flew during the two-seater spacecraft program).

But it isn't just the number that matters, itis the names.

Not that the likes of Duke, Buzz Aldrin orChris Kraft can be dismissed as the "usual suspects" for suchprograms (if they are, it is because they are great story tellers) but"When We Left Earth" reaches beyond those seen in priordocumentaries.

Flight directors Chris Kraft and Gene Kranz(of "Failure is not an option" fame) is joined by their lesser knownpeer Glynn Lunney. Marilyn Lovell and Susan Borman, wives of astronauts Jim andFrank, are interviewed. And on the subject of space explorers, the likes of JimMcDivitt and Bill Anders make rare on-camera cameos.

And then there is Neil Armstrong.

Contrary to urban legend, Armstrong is notreclusive. He lectures several times a year and he recently authorized hisbiography to be published (which is now optioned for a major motion picture).That aside, the number of times he has agreed to a one-on-one media appearanceover the 40 years since his moon landing could be counted on one hand.

If a picture is a worth a thousand words,then the words shared by Armstrong, Lovell and others are well matched to thehigh-definition imagery.

The six episodes of "When We LeftEarth" document the United States' crewed space flights over the pastfive decades. Two hours are devoted to Mercury and Gemini, followed by twocovering the Apollo program and its spin offs, Skylab and the Apollo-Soyuz TestProject. The final installments bring us current with the space shuttle and itsmissions to service the Hubble Space Telescope and assemble the InternationalSpace Station.

Narrated by Gary Sinise ("Apollo13", "Mission to Mars", "CSI: NY"), the tone of theepisodes can sometimes lean toward the dramatic, emphasizing the risks ratherthan how smoothly some of the key mission milestones really were. The seriesalso glides (if not altogether skips) over certain missions, either for thelack of interviewees or the constraints of time. These slight drawbacks,however, are only noticeable if you are already familiar with the history.

Even if you were one of the hundreds ofthousands who made the history on screen possible, or have seen every hour ofthe 'unseen' footage, there are ample reasons to not miss watching Discovery's"When We Left Earth: The NASA Missions" Indeed, you'll find yourselfnot wanting to leave the TV, let alone the planet.

The Discovery Channel's six-episodeminiseries ?When We LeftEarth? will air in two-episode installments beginning June 8 at 9 p.m. ET(check local listings). The series will also be available in a DVDor Blu-Ray box set.