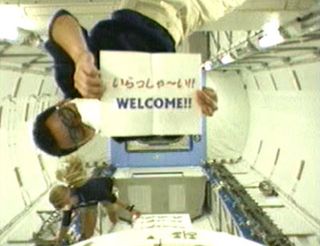 Japanese astronaut Akihiko Hoshide holds up a sign for the camera as he enters the Kibo lab for the first time.
(Image: © NASA TV)

Japaneseastronaut Akihiko Hoshide opened the massive $1 billion Kibo laboratory at 5:05p.m. EDT (2105 GMT) with a short speech before he and nine crewmates floatedinto its roomy interior a few minutes later.

?This is agreat moment for the Japanese folks,? Hoshide said. ?One engineer down on Earthsaid it looks very empty, but it?s full of dreams, and I really think that?swhat it is.?

Hoshide andNASA astronaut Karen Nyberg were the first to float into gleaming Kibo module.They wore face masks and goggles to protect against any loose debris that mayhave been floating around.

But cautionsoon gave way to orbital play as all 10 astronauts aboard the docked stationand shuttle Discovery bouncedoff Kibo?s curved walls, struck poses for photographs and performedweightless somersaults and flips.

?It wasjust the coolest moment for me,? space station flight director Annette Hasbrooksaid of the opening. ?You watched them just fly in, and they shot through themodule. It was just outstanding.?

Weighing inat nearly 15 tons, Japan?sKibo laboratory is the largest room ever launched to the space station. Itis almost 37 feet (11.2 meters) long, about 14.4 feet (4.4 meters) wide and hasits own airlock, two windows and a robotic arm. Japanese engineers are watchingover the new module from the country?s Tsukuba Space Center to the north ofTokyo.

Astronautswill add a second piece to the Kibo facility, an attic-likestorage module already aboard the station, on Friday. A third segment - aporch-like external platform for experiments and a smaller robotic arm - areslated to be launched to the station next year.

The newlaboratory is so large it was launched nearly empty, with many of its equipmentracks tucked away in its storage module atop the station?s hub-like Harmonyconnecting node. Kelly has called Kibo?s main room the ?Lexusof space station modules.?

?I knowit?s been like 20 plus years to get this module up in space,? Hoshide said ofKibo, whose name means ?hope? in Japanese. ?It?s a beautiful module, and wehave a new ?hope? on the space station.?

Kibo?ssuccessful opening came just hours after station astronauts successfullyrepaired a brokenRussian space toilet aboard the orbiting laboratory, and one day after thenew Japanese module itself was installed during a Tuesday spacewalk.

Shuttleastronauts also successfully tested the delicate laser and camera sensors atthe tip of Discovery?s heat shield inspection boom, which they retrievedTuesday after months in storage outside the station.

The mainKibo laboratory is the third new room to be added to the station this year. Inaddition to its storage room and a Canadian maintenance robot, which a previousshuttle crew delivered in March, the station also received the European SpaceAgency?s $2 billion Columbus laboratory during a February shuttle flight.

?We?remissing the Europeans and the Canadian crewmembers up here, but this is aninternational program,? Hoshide said. ?The Kibo lab is open!?

WithJapan?s new space lab open for business, astronauts aboard Discovery and thestation will now turn their attention to their next spacewalk on Thursday, a6.5-hour excursion aimed at priming Kibo for orbital spaceflight.