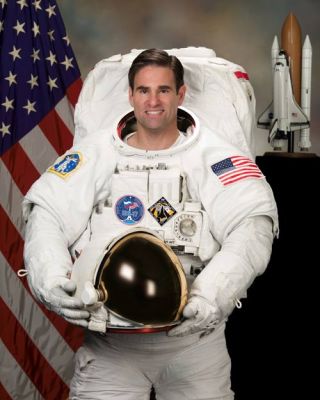 Doctor of philosophy in aeronautics and astronautics from the MassachusettsInstitute of Technology, 1992. Master of science in space science planetarygeology from the University of Houston Clear Lake, 2002.

EXPERIENCE: As an undergraduate student at CalPoly, Chamitoff taught lab courses in circuit design and worked summerinternships at Four Phase Systems, Atari Computers, Northern Telecom, and IBM.He developed a self-guided robot for his undergraduate thesis project. While atMIT and Draper Labs (1985-1992), Chamitoff worked on several NASA projects. Heperformed stability analysis for the deployment of the Hubble Space Telescope,designed flight control upgrades for the Space Shuttle autopilot, and developedattitude control system software for the Space Station. In his doctoral thesis,he developed a new approach for robust intelligent flight control of hypersonicvehicles. From 1993 to 1995, Dr. Chamitoff was a visiting professor at theUniversity of Sydney, Australia, where he led a research group in thedevelopment of autonomous flight vehicles, and taught courses in flightdynamics and control. He has published numerous papers on aircraft andspacecraft guidance and control, trajectory optimization, and Mars missiondesign.

Selected byNASA for the Astronaut Class of 1998, Dr. Chamitoff started training in August 1998and qualified for flight assignment as a Mission Specialist in 2000. Hisassignments within the astronaut office have included Space Station procedureand display development, crew support for ISS Expedition 6, lead CAPCOM for ISSExpedition 9, and Space Station Robotics.

In July2002, Dr. Chamitoff was a crew-member on the Aquarius undersea research habitatfor 9 days as part of the NEEMO 3 mission (NASA Extreme Environment MissionOperations).

Dr.Chamitoff is currently assigned as ISS Flight Engineer and Science Officer onExpedition 17 and will spend six months living and working onboard theInternational Space Station. He is scheduled to fly to the station as a missionspecialist on shuttle mission STS-124, during which the Japanese Experiment Modulewill be installed and activated. He will return to Earth on shuttle missionSTS-126.