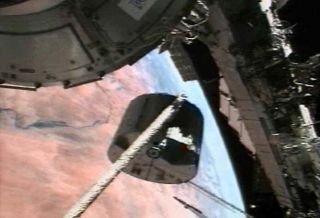 ISScommander Peggy Whitson had the honors of opening the new room, known as the JapaneseLogistics Pressurized module (JLP), with STS-123 shuttle missionspecialists Rick Linnehan and Takao Doi, a Japan Aerospace Exploration Agency (JAXA)astronaut. The module is the first segment of JAXA?s massive Kibo, or ?Hope,?laboratory to be delivered to the station.

?This is asmall step for one Japanese astronaut but a giant entrance for Japan to a greater and newer space program,? Doi said shortly after opening the module. Priorto his spaceflight, Doi referred to the opening of the JLP as a dream.

Mission controllers sent computer commands thepallet Thursday morning, but the operation failed. Following a successfulspacewalk by two astronauts early Friday, an upload of new power-regulatingsoftware also did not send electricity through the device.

"Weweren't going to fool ourselves by thinking that there weren't going to be anyissues," said Pierre Jean, acting program manager for the Canadian spacestation program, of the robot. "But nonetheless we have to deal withthem."

Despite thetwo foiled attempts to supply Dextre with power, which is crucial forprotecting the robot from circuit-snapping cold, Jean said Friday morning that histeam pinpointed the problem's origin.

"It'sbasically a design error in the cable," Jean said of a power line thatroutes electricity through the pallet to Dextre.He explained that the improperly designed cable allows power to flow, butdoesn't relay data to and from a computer.

Astronautsconfirmed that the cable was to blame — and not Dextre — by grappling the robot'shead with the space station's robotic arm, circumventing the faulty wire and powering the robot directly.

Thespaceflyers completed the maneuver at 9:59 p.m. EDT (0159 GMT March 15) and minutes later missioncontrollers told them it was a success.

"Todayin our mission management team [meeting], we went ahead and cleared the TPS fordeorbit and entry," Cain said. "So the vehicle is safe to come homewhenever we are ready to do so."

During thebriefing, Cain said that an auxiliary power unit ? which has compartments ofhydrogen and hydrazine ? has a small leak, adding that specialists willcontinue to monitor the problem.

?We?ve seenthis on flights before,? Cain said of shuttle Discovery?sSTS-121 flight. He said a hydrogen leak would be of little concern, buthydrazine would pose a small threat and can be detected by ittemperature-dropping properties.

?We?relooking for thermal indications, or any kind of ice or frost, or snowy flakeylooking stuff developing on the vents,? he said. If hydrazine is leaking, Cainexplained that burning the remaining supply would stop the problem.

Endeavour launchedfrom Kennedy Space Center early Tuesday morning and docked at the space stationWednesday night and is scheduled to return to Earth on March 26.