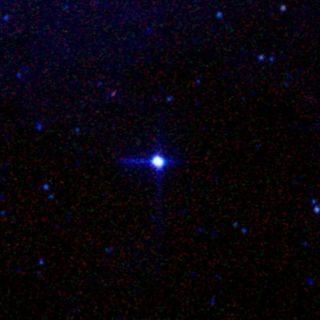 If thenearest star system, Alpha Centauri, does harbor rocky planets similar to Earthas new findings suggest, there exist a host of ways to get us there, in theory.

Sending aperson to Alpha Centauri within a human lifetime wouldn't be easy. AlphaCentauri is 4.37 light-years away ? more than 25.6 trillion miles, or more than276,000 times the distance from the Earth to the sun.

But thelure has never been stronger. Scientists last week said the Alpha Centaurisystem has the ingredients for an Earth-likeplanet, and they think they can spot it.

Conventionalrockets are nowhere near efficient enough. At a maximum speed of about 17,600 mph (about 28,300 kph), it would take the spaceshuttle, for example, about 165,000 years toreach Alpha Centauri. In any case, "the problem with conventional rocketsis that if you're carrying fuel, you need fuel just to carry all the fuel youbring with you, and it just gets exponentially worse," Landis said.

But antimatterengines might work. These drives rely on the extraordinary amount of energyreleased when antimatterand matter annihilate each other. The problem, however, is creating enough andstoring any antimatter for the trip.

"Allof the current methods of manufacturing antimatter require enormous particleaccelerators and produce antimatter in very small quantities," Landissaid. "And to store antimatter, if you need a ton of magnets for one gramof antimatter, the entire idea of a lightweight way to store immense amounts ofenergy is no longer lightweight."

Althoughone could in principle freeze anti-hydrogen and thus bypass the need formagnets, "if even the tiniest amount ever leaked out and touched the wallssurrounding it, you'd produce a lot of heat, which in turn would heat up thefrozen anti-hydrogen, and the whole thing catastrophically goes away,"Landis said.

Antimattercould nevertheless perhaps find use in interstellar spaceships as a way to helptrigger nuclear reactions. "That's something that hasn't been ruled outyet, and a little antimatter could help go a long way," Landis said.

Instead ofrockets that carry all their fuel with them, spaceships might scoop it up alongthe way. One design proposed by physicist Robert Bussard (who died last year)would employ giant electromagnetic fields to suck in hydrogen to fuel a nuclearrocket.

Unfortunately,this "ramscoop" or Bussard ramjet, probably could not work. "Theinterstellar medium is not as dense as Bob Bussard thought it would be,"Landis said. "And so far all attempts to design some kind of scoop had theunfortunate effect of producing more drag than you get back thrust, workingkind of like parachutes."

Moreover,"we don't really have any notion of how to use the pure hydrogen we findin interstellar space as fusion fuel," Landis added. All of the proposalsfor fusion in the lab use deuterium-tritium (two isotopes of hydrogen) ordeuterium with helium-3 (an isotope of helium) ? "we don't have anysuggestions for pure hydrogen in a fusion reaction," he said. "It wasa clever idea, but the devil's in the details."

Light sailsmight be another way to go ? giant,thin, lightweight reflective sails that rely on the slight push provided bylight beams. "The point is to not carry the energy you need for propulsionwith you, but to get it transmitted to you," explained Jordin Kare, aSeattle-based technical consultant on advanced space systems.

Instead ofrelying just on the enormous amount of light given off by the sun, light sailsto Alpha Centauri could also ride laser beamsthat earthlings would fire carefully at those ships to give an extra boost,especially when sails were too far away to catch much light from our sun.

The ideawith a laser sail is that the sky is the limit in regards to speed. You justkeep accelerating, albeit gradually.

The problemwith interstellar travel with laser sails is that a lot of light needs to beused for a long time to get fast enough to get to Alpha Centauri within a humanlifetime. This means very powerful and extraordinarily large lasers are needed inorder to focus on sails that get farther and farther away, Kare explained.

An ideasimilar to light sails that Landis helped come up with involved firing aparticle beam at a spaceship that would ride that energy. "The problemwith laser beams is that they disperse over distance, so we thought aboutparticle beams," Landis explained. The beam would have to have a neutralelectrical charge so as not to disperse itself over time. "It would be afeasible idea," he said.

Anotheridea for space travel would involve riding explosions through space. Such"pulsed propulsion" would hurl bombs behind a ship, which is shieldedwith a giant plate. The explosions would push against the plate, propelling theship. ProjectOrion suggested using nuclear bombs, while other proposals have sinceproposed smaller explosives.

A varianton both the laser sail and pulsed propulsion idea that Kare came up with wasthe "sailbeam." Essentially, a laser would propel lots of miniature sails likebullets at a distant ship. The impact of these sails would propel thespacecraft.

"Theidea is to get a craft up to about a tenth of the speed of light thatway," Kare said. "It could get you to Alpha Centauri in 60 to 70years."

So far noone has created technology that is widely agreed upon as capable of caring foror preserving humans across the lifetimes it might take to get to AlphaCentauri. It might easily take more than one lifetime to reach the star system? one antimatter engine design would take 200 years tosend humans there. If that proves so, mission designers might have to take sexand family into account so offspring of the original crew would be aroundat the end of the trip, unless someone successfully invents a technique forplacing people in suspendedanimation.

Then again,warpdrives and similar far-out ideas might one day zip us faster than light toAlpha Centauri and beyond. "We don't know all the physics there is to knowyet, and something we don't know yet might give us tremendouscapabilities," Landis said.