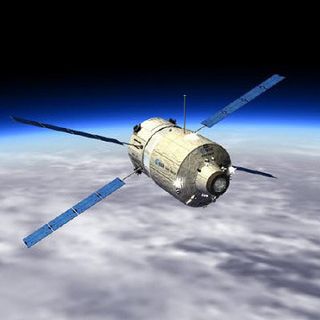 Europe’sfirst unmanned space freighter bound for the International Space Station (ISS) iscounting down toward its launch debut tonight from a spaceport on the northern SouthAmerican coast.

Weighing inat nearly 21 tons, Jules Verne is the first of a new fleet of AutomatedTransfer Vehicles (ATVs) built for the ESA to ferry new supplies andequipment to the ISS. It is the firstcompletely new spacecraft to visit the space station in nine years and canhaul about three times the cargo of Russia’s current unmanned Progress spacefreighters.

“It’s amajor milestone and we’re getting within touching distance of where we want tobe, which is to get on orbit,” said ESA space station program manager AlanThirkettle.

Named afterthe famed 19th century science fiction writer Jules Verne, of France, Europe’s inauguralATV is the first of five cargo tugs that will deliver fresh supplies to the ISSthrough 2015 in return for a six-month berth for an ESA astronaut every otheryear. In all, ESA officials plan to launch seven such spacecraft to the spacestation.

But first,Jules Verne must prove its space worthiness.

As of late Friday,ESA officials were watching a low cloud layer, as well as a low probability ofthunderstorms, as they prepared for tonight’s launch attempt. Jules Verne has untilMarch 10 to attemptits maiden launch before ESA officials would stand down to clearcommunications satellite traffic to support the planned March 11 launch of NASA’sshuttle Endeavour on its 16-day construction flight to the ISS.

WhileEndeavour’s STS-123 astronaut crew delivers a new Japanese room and Canadianrobot to the ISS, Jules Verne will take up a parking orbit about 1,200 miles(2,000 km) away from the station. It will deliver its cargo - including twomanuscripts by its namesake - to the orbiting lab after Endeavour departsand before the April 8 launch of a new ISS crew aboard a Russian spacecraft,ESA officials said.

Designed todock at the aft end of the station’s Russian-built Zvezda module, Jules Verne isa 32-foot (10-meter) long cylinder with X-wing-like solar arrays and a diameterof about 14.7 feet (4.5 meters). The spacecraft weighs of about 23,000 pounds (10,432kg) when empty and can be loaded with more than 16,800 pounds (7,620 kg) offresh food, equipment and rocket propellant.

“Just to geta sense of what the size of this great bird is; we’re about the size of a London[double-decker] bus,” said John Ellwood, the ESA’s ATV project manager.

While JulesVerne is launching with less than its maximum capacity, ATVs are designed tohaul about 12,000 pounds (5,443 kg) of cargo to the space station inside their 1,685-cubic-foot(almost 48-cubic-meter) interiors. Tanks inside the spacecraft can hold about1,850 pounds (839 kg) of water, 220 pounds (100 kg) of oxygen and air and 1,890pounds (857 kg) of fuel for the station’s Russian thrusters. Jules Verne, itself,can hold more than 10,000 pounds of propellant to feed its four main enginesand 28 thrusters during flight and in maneuvers to boost the station’s orbit.

“When weget to orbit, we have 14 days of work,” said Mike Suffredini, NASA’s spacestation program manager.

Europeanflight controllers will watch over Jules Verne’s flight from a new ESA MissionControl Center in Toulouse, France. In addition to testing the spacecraft’s collisionavoidance system, they will monitor Jules Verne during two demonstration days -set for March 29 and March 30, respectively - to check its automated rendezvoussystems. If all goes well, the spacecraft is due to dock on April 3.

UnlikeRussia’s automated Progress cargo ships, which can be remote controlled byastronauts inside the ISS if their navigation system goes haywire, stationcrewmembers have only a big red button to send Jules Verne out to a safedistance should it stray off course, ESA officials said.

“The crewwon’t do anything at all if the rendezvous is nominal,” said Bob Chesson, the ESA'schief of human spaceflight and exploration operations.