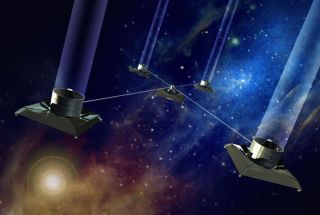 New academic disciplines often get cool receptions.Women's Studies and Quantum Mechanics were considered either frivolous orfictional by many when they first appeared in university catalogs. In the late1930s, the manuscript that Grote Reber wrote describing low-frequency emissionfrom the Milky Way — a pioneering work that broke open the field of radioastronomy — was uniformly rejected by reviewers for the Astrophysical Journal.Fortunately, the editor decided to publish Reber's paper anyway.

Astrobiology feels their pain. The field is young enoughto still have vocal critics; in particular, those who think that"astrobiology" is nothing more than a hope that life will someday bediscovered beyond Earth.

It's true that incontrovertible proof of extraterrestriallife is still lacking. But there are just two paths to the future: either wewill eventually find biology elsewhere, or we won't. If you are among those whothink that only Earth has spawned life, then astrobiology is, indeed, onlyuseful in proving your hypothesis by enduring endless failure to reach itsultimate goal. But if it seems plausible that, among the 10 thousand billionbillion other star systems of the visible universe, there are some places wherethe remarkable chemical interplay we call life also occurs, than astrobiologyresearch can only speed its discovery.

A quick head count of astrobiologists at the SETIInstitute tallies almost 50, and there are about 75 more across the freewaypopulating the cubes and labs of NASA's Astrobiology Institute at the AmesResearch Center. This contingent, as impressive as it is, is merely a localcondensation in a far larger cloud of researchers. Nationwide, it's reckonedthere are approximately a thousand scientists who would be proud to print"astrobiologist" on their business cards.

Are this many serious and accomplished researcherstoiling away with nothing more tangible than a hope that their work willeventually be justified? Of course not. The pursuit of the study of themechanisms of life, and of its history and habitats, has produced some of themost exciting science discoveries of the past decade. Let's refine that verygeneral statement with some specifics:

Life amongst the stars

It seems like forever ago, but in the mid-1990s we stilldidn't know whether planets – the cool worlds that are most conducive to life —were superabundant or scarce. In the last decade, astronomers have uncoverednearly 200 worlds orbiting nearby stars. The actual fraction of all stars withplanets can only be guessed, but it certainly exceeds 5%, and could possiblysurpass 90%. It's hardly a radical hypothesis to suspect that the cosmos housesmore planets than stars.

Few of these extrasolar planets have been seen directly,but one of astrobiology's most daring experiments is planning to capitalize ontheir discovery: the launch of space-based, infrared telescopes — such asNASA's Terrestrial Planet Finder — that can not only image the faint,pin-pricks of light that mark these worlds, but analyze their spectralsignatures for evidence of tell-tale gasses (such as oxygen and methane) thatwould signal the presence of microbial life. Just as SETI scientists pivottheir antennas at nearby star systems in an effort to find intelligence, the astrobiologistsare drawing up their own plans to detect life from afar – life that's tens oflight-years beyond the solar system.

The plentitude of extrasolar planets is not the onlyrecent discovery to revolutionize our attitude about how conducive the cosmosmight be to life. A decade ago, a "habitable" planet was one that wasa simulacrum of Earth — a world that basked in the warmth of a star, with athick atmosphere and watery, surface oceans. Other worlds might be intriguing;but other worlds were dead.

Now it seems that this presumed death may have beengreatly exaggerated. In a truly eye-opening discovery, astrobiologists havelearned that there are mechanisms other than starlight that can substantiallywarm a planet. The resonant interplay of moons in multi-satellite systems leadsto an endless tug-and-squeeze that can generate more than enough heat to keeplarge reservoirs of water in a liquid state, and provide localized sources ofenergy (such as the churning vents found on ocean floors) that could fuelbiology.

Moons such as Europa, Callisto, Ganymede, and Enceladus —once considered no more than dead rock — are today recast as potential sitesfor life. Even Titan — for which the tug-and-squeeze of tidal forces is unimportant — might occasionally have long-lived pools of liquid water under its surface,melted into existence by occasional asteroid impacts.

Indeed, the attractiveness of moons as places where lifemight appear has recently been extended by researchers to include putativesatellites that are far larger than the familiar moons of our solar system.Such mammoth moons (perhaps the size of Earth), girdling gas giant planetsorbiting other stars, might offer environments as salubrious for life as ourown planet.

In other words, even very non-Earth-like worlds mighthost liquid water, thereby fulfilling the requirements set forth in Biology101. Such worlds may not be capable of supporting complex life, and mostterrestrial life forms would speedily perish if transported to their environs.But not all. Astrobiologists continue to make surprising discoveries about howresilient life can be. The first extremophiles, dwelling in places likeYellowstone Park, were found almost a century ago. In the last decade, we'vecome to learn of organisms that can thrive in rock a mile beneath the surface,or in the ink-black deeps of the oceans.

Extremophiles are considered exceptional on Earth. Butthey might be widespread elsewhere, simply because you can bet that themajority of worlds are tough rather than temperate.

The evolution of life

While finding life beyond our planet might offerprodigious insights into biology's workings on Earth, the reverse is also true.It's important to understand the endpoints of terrestrial life: its start, andthe evolution of intelligence. Recent investigations by astrobiologists inAustralia and Norway strongly suggest that life had gained a foothold on Earthmore than 3.5 billion years ago, when the watery oceans of our planet werefirst safe for habitation. Astrobiologists are asking how this happened, andinvestigating the role played by the clouds of carbon compounds churned up innearby space, and rained onto our planet while it was forming. Was this naturalfertilizer essential, or merely supplemental?

The facts are that DNA and RNA are enormously complexmolecules, and their appearance by chance seems, to some, improbable. Butresearchers have pointed to natural structures, such as clays, that could actas catalysts to speed the start of life. We still don't know for sure how lifefirst began on Earth, but this highly fecund area of research could bear sweetfruit for astrobiology, either telling us that life is so improbable as to benearly miraculous, or so inevitable as to be trivially common.

Equally exciting is research into how evolution produced,in the last few hundred thousand years, intelligence. Was this a mere accidentthat occurred on our planet — an unlikely consequence of contingency andchance? Some of astrobiology's most challenging investigations are sighted onunderstanding whether sentient life is to be expected often, or almost never.

The implications of these forays into unraveling life'ssecrets on Earth have obvious application to our search for it elsewhere.Clearly, astrobiology underlies our SETI searches; but if you think about it,you'll quickly realize that it's also the most powerful incentive for ourexplorations of the solar system. Why do we pay so much more attention to Mars,Europa and Titan than we do to Venus, Io, or Rhea? It's because the formerworlds have the conditions that might foster and nurture the most compellingactivity in the universe: life.