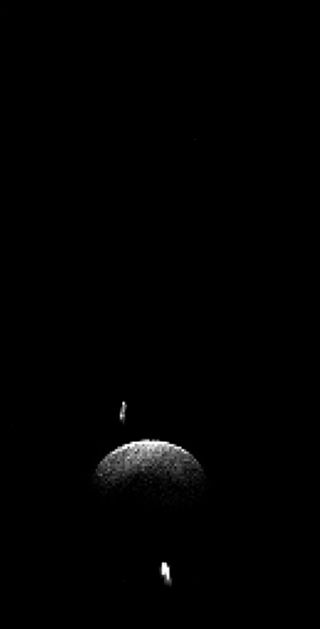 The first triple asteroid near Earth has been discovered.

Astronomers have found plenty of double, or binary asteroids. Triples are known to exist, too (the first triple was found in 2005).

It was originally found in 2001, but new observations with the radar telescope at the Arecibo Observatory in Puerto Rico reveal it is three gravitationally bound rocks.

The main rock is spherical and about 1.5 miles (2 kilometers) wide. Another is about half that size. The smallest is about 1,000 feet across, or about the size of the Arecibo telescope, astronomers said.

"This discovery has extremely important implications for ideas about the origins of near-Earth asteroids and the processes responsible for their physical properties," said Cornell University and Arecibo astronomer Michael C. Nolan. "Double, or binary, asteroid systems are known to be fairly common — about one in six near-Earth asteroids is a binary — but this is the first near-Earth triple system to be discovered."

Most asteroids orbit the sun between Mars and Jupiter. But some are closer in. One recently missed Mars by a cosmic smidgeon.

Near-Earth asteroids are of particular interest because of the possibility they might cross our path some day, as has happened many times in the past. One flew past Earth just last month, in fact. However, 2001 SN263 is not on a collision course with our planet.

Yet asteroids hold many mysteries for astronomers. Nolan said this finding prompts several questions: Are the objects orbiting in the same plane? How rapidly are the orbits changing with time? Did the smaller objects, which Nolan calls moons, form when this asteroid system formed in the main asteroid belt, or after it arrived in near-Earth space?

"Examining the orbits of the moons as we continue to observe 2001 SN263 over the next few weeks may allow us to determine the density of the asteroid and type of material from which it is made," he said. "We will also be studying its shape, surface features and regolith [blanketing material] properties."

The new observations were made Feb. 11 and the discovery announced Wednesday evening. Arecibo is operated for the National Science Foundation by Cornell's National Astronomy and Ionosphere Center.