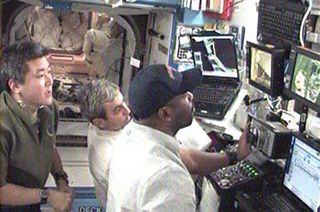 HOUSTON — NASA hustled through thenight to organize detailed plans for the crew of space shuttle Atlantis, followinga medical issue with one of its crew members on Saturday.

In the instructions sent upto the astronauts at the International Space Station (ISS) this morning, NASA noteda small tile falling off of an orbiter engine area known as the left OrbitalManeuvering System (OMS) pod "stinger" in pre-launch photos. Theyalso called for an inspection of a small thermal blanket tear on the right OMSpod.

NASA said it is stillreviewing the stray tile seen near Atlantis' massive engines but noted, however,that "the entry thermal environment is more benign than the ascent thermalenvironment at this location."

Led bycommander Stephen Frick, the STS-122 shuttle mission crew was slated to installthe European Space Agency's (ESA) newColumbus laboratory on the International Space Station (ISS) during aspacewalk today. But NASA delayed the orbital work by 24 hours and swapped outan original member of the spacewalking team on Saturday due to medical concernsraised by the crew.

NASA refusedto disclose what themedical issue was or whom it affected. ESA astronaut Hans Schlegel was setto assist mission specialist Rex Walheim on the mission’s firstspacewalk, and Schlegel has since been replaced by mission specialist StanleyLove.

JohnShannon, deputy shuttle program manager here at NASA's Johnson Space Center(JSC), said Saturday that the agency also added an extra day to the crew'soriginal 11-day mission. Mission managers quickly pulled together a set ofplans as to what activities astronauts will perform today more than 210 miles(338 kilometers) above the Earth.

"Themid-deck transfers all have to take place and that takes a tremendous amount oftime," Shannon said of the supplies still on board in Atlantis. Expedition16 commanderPeggy Whitson, who celebrated her 48th birthday Saturday, confirmed withmission controllers that she would partake in the transfer duties today.

Shannon also said last night that operationsteams at JSC might instruct the astronauts to take more images of a small thermalblanket tear in a rear section of Atlantis, called the Orbital ManeuveringSystem (OMS) pod.

"Weasked the team … if we were go and try to get any additional imagery onthat right OMS pod," Shannon said, suggesting that Atlantis' robotic armmay be used to take additional images. "[Sunday] might be a good day to dothat."

In fact,the crew was directed this morning to use the shuttle's robotic arm and 50-foot(15-meter) extension boom to do a focused inspectionof the region around 2:15 p.m. EST (1915 GMT) Sunday.

In addition to changing its original mission schedule, NASA swapped members of its STS-122 shuttle and Expedition 16 space station crewsyesterday as planned.

Flightengineer Dan Tani, who has lived on the space station since October 2007, wasformally replaced today by Atlantis astronaut Leopold Eyharts, a Frenchspaceflyer representing the ESA. The transfer took place when Tani'scustom-built seat liner inside a docked Russian Soyuz spacecraft was replacedwith Eyharts'.

"Thankyou very much for this piece of music," Schlegel said after the tunefinished playing. "It's a German ... song about the nature of man."

NASAexpects Atlantis to land on Feb. 19 or possibly Feb. 20 if the agency decidesto add a second day to the mission.