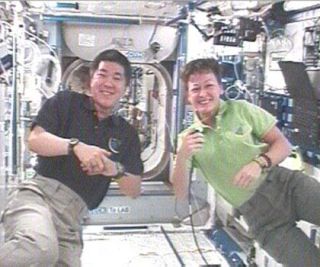 The shuttlecrew will deliver the new European-built Columbus laboratory to the ISS when itdocks Saturday at 12:25 p.m. EST (1725 GMT) on the same day, by coincidence, asstation commanderPeggy Whitson?s 48th birthday.

?It istomorrow, so my present is a new module that we?re going to install on boardthe station,? a smiling Whitson told reporters via space-to-ground video onFriday.

?It?s allabout the sauce. So we?ve made several requests for different sauces to try andspice up the food a bit more,? Whitson said. ?It gets a little old after beingup here for several months.?

Freshtortillas, another hot commodity, are also stowed on board the incoming shuttle,she added.

WhileWhitson and Malenchenko launched to the ISS last fall for a planned six-monthmission, Tani arrived in late October during NASA?s last shuttle flight.

He expectedto return home by Christmas, but delaysto Atlantis? current mission extended his flight by about two months. Taniis now scheduled to return to Earth with Atlantis? crew on Feb. 18, whileEyharts will stay on until a replacement arrives aboard NASA?s Endeavourorbiter next month.

?I?m reallyhappy to see all of them,? Tani said. ?They?re good friends of ours.?