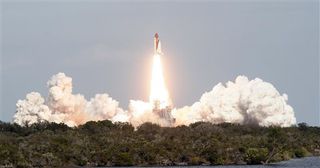 Space shuttle Atlantis lifts off from pad 39A at the Kennedy Space Center, Fla. Thursday Feb. 7, 2008. Atlantis' seven member crew is on a 11-day mission to deliver Columbus, a laboratory module built by the European Space Agency, to the international space station.
(Image: © AP Photo/Marta Lavandier.)

?We knowthe Columbus module?s been many years in the making and we're looking forwardto doing our part to bring it up to Peggy Whitson and her crew on the InternationalSpace Station,? shuttle commander Stephen Frick said just before liftoff. ?We'relooking forward to a great flight and coming back to see our families in twoweeks.?

Atlantis?launch occurred just hours after a Russian cargo ship arrived at the ISS, aswell as seven years to the day that the last science laboratory — the U.S.Destiny module — headed toward the station aboard the same space shuttle. Atlantisis scheduled to dock at the orbital lab on Saturday.

The missionhas been delayed since early December after engine cut-off (ECO) sensors failedstandard countdown tests during two launch attempts. The sensors act as fuelgauges and are designed to serve as a backup system to shut down a shuttle?sthree main engines before its external tank runs dry.

Engineerstracked the glitch to a faulty electrical connector at the bottom of Atlantis?fuel tank and replaced it with a modified design. The sensors performedflawlessly during today?s launch, which reached orbit without requiring theirbackup protection.

"Wewon't have the ECO sensor problem again. We've licked it," Griffin told SPACE.com."We finally got one to misbehave badly enough that it would do so repeatedly,and then we were able to solve the problem."

Thesuccessful launch marked NASA?s first shuttle flight of up to six slated for2008 — the most since the 2003 Columbia tragedy.

Thursday?safternoon liftoff kicked off NASA?s 121st shuttle mission and the 24th boundfor the ISS. It also marked the 29th launch of Atlantis, which is currentlypegged for retirement after this summer?s planned servicing mission to theHubble Space Telescope.

NASA plansto launch up to 11 more shuttle flights to the space station, and one to theHubble Space Telescope, by the September 2010 retirement date for its agingthree-orbiter fleet.

Named afterChristopher Columbus in honor of his Atlantic Ocean-crossing trip in 1492, theESA?s Columbus laboratory and its built-in experiment racks weighed about 13tons at liftoff. By launching the module with science hardware already inplace, ESA officials hope to jumpstart research aboard Columbus soon after itarrives at the ISS.

"Inabout four or six weekstime, we'll have commissioned Columbus," Thirkettle said of the module'soutfitting. "We'll have started getting science down, we?ll have startedputting a smile on the faces of scientists, getting the results back that allof the investment has been there for."

More than350 ESA representatives and supporters attended Atlantis? launch to seeColumbus off this week, he added.

The ESAspent 1.4 billion Euro ($2 billion) to build Columbus, which will increase the spacestation?s internal volume by about 2,648 cubic feet (75 cubic meters) once itis completely installed. Eyharts, a veteran ESA astronaut from France willchristen the new lab when he replaces U.S. spaceflyer Dan Tani as an Expedition 16flight engineer during the upcoming shuttle mission.

?This willbe the first time Europe will have a permanentbase in space,? Eyharts said in a NASA interview. ?Of course, this is veryimportant, and this is very challenging."

Eyhartswill spend about three months aboard the ISS with the station?s Expedition 16 crewcommanded by NASA astronaut Peggy Whitson. He and his STS-122 crewmates areslated to dock at station at 12:23 p.m. EST (1723 GMT) on Saturday. The shuttleis due to return to Earth on Feb. 18.

?It?s funto have visitors and we?re looking forward to having them,? Whitson has said. ?Especially since they?re bringinga new room for our house.?