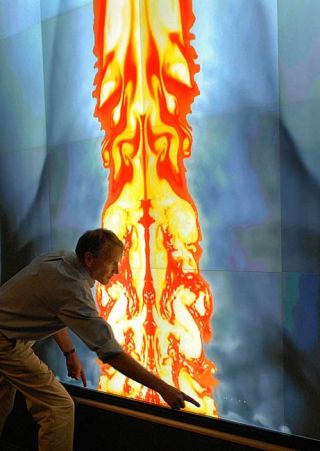 A supercomputer simulation of a fireball that might be expected from an asteroid exploding in Earth's atmosphere, as pointed out by Sandia National Laboratories researcher Mark Boslough.
(Image: © Randy Montoya)

Theinfamous Tunguska explosion, which mysteriously leveled an area of Siberianforest nearly the size of Tokyo a century ago, might have been caused by animpacting asteroid far smaller than previously thought.

The fact that a relatively small asteroid couldstill cause such amassive explosion suggests "we should be making more efforts at detecting thesmaller ones than we have till now," said researcher Mark Boslough, aphysicist at Sandia National Laboratory in Albuquerque, N.M.

Theexplosion near the Podkamennaya Tunguska River on June 30, 1908, flattened some 500,000acres (2,000 square kilometers) of Siberian forest. Scientists calculated theTunguska explosion could have been roughly as strong as 10 to 20 megatons ofTNT — 1,000 times more powerful than the atom bomb dropped on Hiroshima.

Wildtheories have been bandied about for a century regarding what caused the Tunguskaexplosion, including a UFO crash, antimatter, a black hole and famedinventor Nikola Tesla's "death ray." In the last decade, researchershave conjectured the event was triggered by an asteroid exploding in Earth'satmosphere that was roughly 100 feet wide (30 meters) and 560,000 metric tonsin mass — more than 10 times that of the Titanic.

Thespace rock is thought to have blown up above the surface, only fragmentspossibly striking the ground.

Nownew supercomputersimulations suggest "the asteroid that caused the extensivedamage was much smaller than we had thought," Boslough said.Specifically, he and his colleagues say it would have been a factor of three orfour smaller in mass and perhaps 65 feet (20 meters) in diameter.

Thesimulations run on Sandia?s Red Storm supercomputer — the third fastest in theworld — detail how anasteroid that explodes as it runs into Earth's atmosphere will generate asupersonic jet of expanding superheated gas. This fireball would have causedblast waves that were stronger at the surface than previously thought.

Atthe same time, previous estimates seem to have overstated the devastation theevent caused. The forest back then was not healthy, according to foresters,"and it doesn't take as much energy to blow down a diseased tree than ahealthy tree," Boslough said. In addition, the winds fromthe explosion would naturally get amplified above ridgelines, making theexplosion seem more powerful than it actually was. What scientists had thoughtto be an explosion between 10 and 20 megatons was more likely only three tofive megatons, he explained.

Allin all, the researchers suggest that smaller asteroids may pose a greaterdanger than previously believed. Moreover, "there are a lot more objectsthat size," Boslough told SPACE.com.

NASAAmes Research Center planetary scientist and astrobiologist David Morrison, whodid not participate in this study, said, "If he's right, we can expectmore Tunguska-sized explosions — perhaps every couple of centuries instead ofevery millennia or two." He added, "It raises the bar in the longterm — ultimately, we'd like to have a survey system that can detect thingsthis small."

Bosloughand his colleagues detailed their findings at the American Geophysical Unionmeeting in San Francisco on Dec. 11. A paper on the phenomenon has beenaccepted for publication in the International Journal of Impact Engineering.