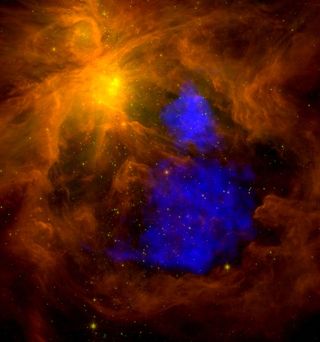 Stars in our galaxy may often pumpout waves of million-degree gas that make surrounding nebulas glow with x-rays.

These new findings could shed light into how planetarysystems form—including our own solar system, researchers said.

Astrophysicists focused on the OrionNebula, a cloud of dense and turbulent gas visible to the naked eye in thenight sky, right below the belt of the constellation Orion. Four extremely bright and massive stars, called theTrapezium, light up the nebula.

One stretch of the nebula, about 10 light-years wide,glows with x-rays. This glow apparently results from super-heated gas—some 1.7million to 2.1 million degree Celsius hot—that pervades the cloud.

The Orion Nebula is a"stellar nursery," where thousands of new stars are being born. Thereare many stellar nurseries throughout the Milky Way that, like the OrionNebula, only host a few very massive stars. The researchers expect these x-rayglows occur in many or even all of these nurseries, meaning they "may bevery widespread across the entire galaxy,"researcher Manuel Gudel, an astrophysicist at the Swiss Federal Institute ofTechnology in Zurich, told SPACE.com.

"It is now widely believedthat the sun was born in an Orion-like environment," Gudel added."Hence, every new piece of information we collect on Orion hasimplications on the early history of the solar system, and therefore on ourunderstanding of our own origins."

The researchers now hope tounderstand how these x-ray glows might alter the environments in whichplanetary systems form, possibly even influencing the very chemistry of worlds,Gudel said.

Gudel and his colleagues reportedtheir findings online Nov. 29 in the journal Science.