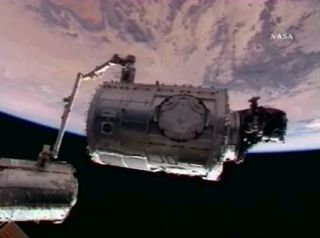 The Italian-built Harmony connecting node and its PMA-2 shuttle docking port hang off the end of the International Space Station's robotic arm during a Nov. 14, 2007 move by the Expedition 16 crew
(Image: © NASA)

Astronautsaboard the International Space Station (ISS) moved their orbital laboratory's latestaddition to a new perch Wednesday as engineers on Earth studied a spacesuitglitch that may impact the crew's spacewalk plans.

?Harmony has found its Destiny, its new home at the forwardend of the International Space Station,? said NASA commentator John IraPetty as astronauts attached the hub-like node into place.

The Italian-built Harmony node is equipped with six dockingports in all, two of which provide connections between the ISS and NASA spaceshuttles. Four other berths will be used to connect European and Japaneselaboratories, as well as other modules, to the ISS. The European Space Agency?s Columbus lab, set to launch Dec. 6 aboard NASA?s shuttle Atlantis, will bethe first to arrive at Harmony next month.

The module?ssuccessful Wednesday move sets the stage for a pairof spacewalks next week to route power and cooling lines to Harmony, thoughthe planned Nov. 20 and Nov. 24 excursions must wait until NASA engineers clearthe space station?s U.S. spacesuits for orbital work.

NASA haltedall U.S. spacewalk plans earlier this week after an astronautsmelled smoke inside a U.S. spacesuit - known as an Extravehicular MobilityUnit - during a Friday ground test at the agency?s Johnson Space Center in Houston, Texas.

Engineersdid not find any evidence of combustion or damage in the test spacesuit, NASAspokesperson Brandi Dean told SPACE.com late Tuesday. They will presenttheir findings to a mishap investigation team later today, she added.

NASA couldclear the space station?s U.S. spacesuits for use as early as today orThursday, well ahead of next week?s planned spacewalks, space agency officialssaid.

?This, Ithink, officially ends all of my planned robotics operations for my missionhere,? said Tani, who is set to return to Earth nextmonth aboard Atlantis. ?I have really enjoyed running the arm and hopefully Ididn?t scare too many people down there.?

?It all lookedbeautiful from the ground,? NASA astronaut Kevin Ford replied from Mission Control.

Whitson andTani completed the move about two hours ahead of schedule as they and Russiancrewmate Yuri Malenchenko continue with a busy month of ISS construction work toready the space station for December?s planned shuttle mission. They opened the hatches between Harmony and the ISS at about 11:52 a.m. EST (1652 GMT).

Expedition16 astronauts primed Harmony for its move during a Nov. 9 spacewalk, thenequipped the module with its shuttle docking port early Monday. Harmony,itself, arrived at the ISS on Oct. 26 during NASA?s STS-120shuttle mission.