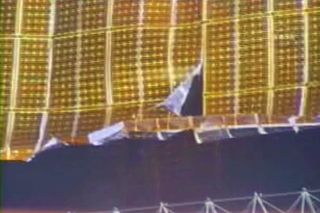 A tear occurred in one of the International Space Station's (ISS) solar array wings during unfurling on Oct. 30, 2007. STS-120 astronauts George Zamka and Stephanie Wilson discovered the tear, but IS commander Peggy Whitson called for the halt to the unfurling operation started by mission control at Johnson Space Center.
(Image: © NASA TV)

HOUSTON — Two spacewalking astronautsreattached a massive solar power plant of the International Space Station (ISS)today, and inspected gears that orient its wing-like arrays toward the Sun.

But duringNASA mission control's unfurling of wing-like solar arrays on the relocated powerplant, the right wing of the 4B solararray crinkled and tore on one edge. The array opposite of 4B, known as 2B,deployed without incident prior to 4B's unfurling.

"Wejust saw the tear and stopped," Whitson told ground controller and shuttlecapsule communicator Kevin Ford after the tear was noticed. She added that theastronauts aboard the orbital laboratory could not clearly see the solar wingduring part of the deployment because the sun's glare blocked their view.

Mission controllers said about 25 meters(82 feet) of the 35-meter (115-foot) electricity-generating array was deployedbefore the unfurling was halted.

It isuncertain at this time how the tear will impact the solar wing's energygathering ability, which the space station's successful construction partlydepends on. Astronauts have begun easing tension on the array to see how thedamaged area responds.

After thebehemoth truss segment was attached, Parazynski scoped out a set of gears thatorient the station's solar panels toward the Sun. The port-side gears areworking normally, but NASA engineers want to compare them to a similar yet misbehavingmechanism at the other end of the space station.

"Ihave a happy story so far," Parazynski said as he looked under a solarcover to the paddle-like joint containing the gears. "They look likethey're brand new machines."

"Itlooked like a black dust of metallic shavings or filings," Tani said ofthe grit during an in-flight interview Monday. "It was unmistakable thatit should not be there."

Theunwelcome discovery prompted officials to extendthe mission by one day, which will make room to replace a short spacewalkwith a long, more complete check-out of the suspect starboard joint onThursday.

The spaceshuttle Discovery is scheduled to land on Nov. 7 at Kennedy Space Center in Cape Canaveral, Fla. The spaceship will ferry ISS crewmember Clayton Andersonback to Earth, leaving Tani to take his place as a member of the Expedition 16crew led by Whitson.