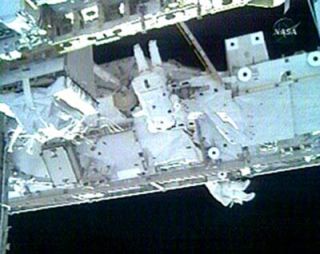 Expedition16 commanderPeggy Whitson and flight engineer Dan Tani spent more than seven hourswiring up about half of the power, heater and cooling lines needed to preparethe station?s new Harmony connecting node for the planned Dec. 6 launch of aEuropean-built lab. They will connect the other half during another spacewalkon Saturday.

?Those werehard,? Whitson said after wrestling with the final coolant line.

Whitson didspot several crystals of toxic, frozen ammonia that apparently leaked out whileshe worked to vent some of the coolant during her work.

?I?ve gotammonia coming out of the vent tool,? Whitson said. ?Two crystals, quite smallones. I have had some of them bounce off of me.?

MissionControl told Whitson to press ahead with her work, confident in establisheddecontamination protocols that included brushing her spacesuit clean and bakingit in sunlight before reentering the ISS.

?Queen,?Whitson, the station?s first female commander, replied with a laugh.

Tuesday?sseven-hour, 16-minute spacewalk marked the secondof three planned excursions in a three-week period for the Expedition 16crew to ready their orbital laboratory for the planned Dec. 6 launch of theshuttle Atlantis and its STS-122astronaut crew. The shuttle mission will deliver Columbus, a European SpaceAgency laboratory designed to dock at one of several available ports on thehub-like Harmony node.

While theExpedition 16 crew worked outside the ISS today, Atlantis?s STS-122 crew stageda launch dress rehearsal inside their shuttle at Pad 39A of NASA?s Kennedy Space Center in Cape Canaveral, Fla.

ButAtlantis, or any other shuttle, won?t be able to dock at the ISS until Harmonyis fully equipped and outfitted, work that will continue during Saturday?splanned spacewalk.

?So there?sa bit of pressure there,? Tani told reporters Monday. ?But we like pressure andwe look forward to getting outside and getting the work done.?

?We?vestill got a lot of challenges up in front of us,? said Derek Hassmann, NASA?slead Expedition 16 flight director, after the spacewalk. ?But based on all thesuccesses we?ve had up to this point, I expect the rest of the stage to go verywell.?

Whitson,Tani and fellow crewmate Yuri Malenchenko - who watched over today?s spacewalkfrom inside the ISS - have already pledged to work through their traditionalThanksgiving holiday this Thursday in order to meet their tight schedule. Hassmannsaid if all continues to go well, the crew should have a relatively light workday on Thursday.

?They arejust a hard-charging, get it done crew,? said Kenny Todd, NASA?s ISS programintegration and operations manager, of the Expedition 16 astronauts on Nov. 16.?We?ll have to make sure they understand that it?s Thanksgiving and that theytake some time and take a breath.?

Tuesday?sspacewalk was the 98th excursion dedicated to ISS assembly or maintenance. Itwas also Whitson?s third spacewalk, giving her a total of 18 hours and 36minutes of spacewalking time. Tani also raised his tally to three spacewalks,ending with a total time 18 hours and 1 minute. Both spaceflyers will alsoparticipate in Saturday?s spacewalk.

Tani sentan orbital greeting to his wife Jane, who watched her astronaut husband at workfrom inside NASA?s Mission Control in Houston.