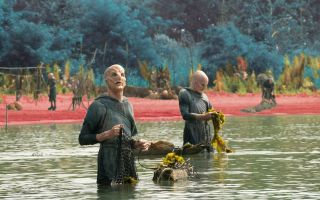 When Saru looks to the skies, he sees hope. When his fellow Kelpien look up at the stars, they see only death.
(Image: © Michael Gibson/CBS)

In the latest episode of CBS All Access' "Short Treks" series, called "The Brightest Star," we follow one of the most popular "Star Trek: Discovery" characters, Saru (played by Doug Jones), at a time before he joined Starfleet.

This penultimate "Short Trek" — each of the episodes is a stand-alone story — opens with our first-ever look at the Kelpien home world, Kaminar. It's a quiet, peaceful place that's not only a pre-warp society, but also a preindustrial society. The inhabitants here still rely on the land and the sea to give them everything they need. [A Closer Look at the New 'Star Trek: Discovery' Season 2 Trailer]

We see a "Logan's Run"-style customary culling taking place, although it's unclear why these particular poor Kelpiens have been chosen — perhaps it's their 30th birthday, who knows.

They do not offer themselves in the chance of "renewal," but instead hope that by "being taken" it will stop the pain of something they call Vahar'ai.

The chosen Kelpiens appear to be instantly vaporized — or possibly transported away — while kneeling around a large black crystal-shaped object that stands like a monument in the center of the village. Priests teach the Kelpien that this practice preserves the Great Balance of Kaminar.

It seems that this crystal-like device is Ba'ul technology (a race we've never heard of before). A piece falls from the ship — as it sometimes does, apparently – during the ritual, and Saru is ordered to dispose of it, but instead he hangs onto it and asks himself why they are forbidden to ask questions about this.

Poor Saru is drawn toward greater understanding of how and why things are the way they are in the classic story of young curiosity battling age-old tradition and ignorance.

During dinner, Saru raises questions about the Kelpiens' culture, which only angers his father ( Robert Verlaque), who fiercely defends the way things are done. All the while Saru's sister, Siranna ( Hannah Spear) looks on, perhaps unsure of what to make of all this herself.

By candlelight, while everyone else is asleep, Saru manages to pry open the piece of alien technology, reconfigure it and send a message into the heavens to see if there is anyone else out there.

Life continues as normal and Saru sometimes looks to the skies, wondering if anyone will ever come.

Then, one night, the device shows a response…and Saru asks his father that perhaps he could "reach Vahar'ai" for the next harvest, seemingly as a last act of desperation to be able to see what's out there beyond his world. His sister looks on and his father replies, "Then it will be your time. And you shall be honored that the Watchful Eye chose you to maintain the balance."

The days pass and Saru wonders about what will come to pass. Then one day a message arrives on the device, saying only the word "today."

Full of fear and wonder, Saru leaves the village at night and says goodbye to his sister. A shuttlecraft appears in the night sky and lands beside him. It looks oddly familiar — possibly of Federation design. The hatch opens and out steps Philippa Georgiou — she's still a lieutenant at this point, although the shuttlecraft bears USS Shenzhou markings.

Georgiou explains what's involved if he comes with her and in doing so, nicely tidies up a few of the questions that anyone watching this will probably have lingering in the back of their minds. Because Kaminar is a pre-warp civilization, allowances had to be made by the Federation to allow first contact, which ultimately means Saru cannot return home if he joins Starfleet.

For a moment, Saru is torn between his love for his home and family and his yearning for more: more life, more knowledge and greater sense of purpose.

"My place is no longer here," he says, and the epic "Star Trek" fanfare plays softly in the background, ensuring every Trekkie has a lump in their throat by the end of this episode.

Each of these shorts — and "The Brightest Star" is no exception — creates as many questions as it does answers. Who are the Ba'ul? Will we see more of them in "Star Trek: Discovery" Season 2? Is the Vahar'ai that Saru speaks of the Kelpien word for living in perpetual fear? When Saru spoke of the Kelpien having evolved into the perfect prey, in "The Vulcan Hello," Episode 1 of Season 1 , this wasn't quite what we were expecting. Plus of course we never see the Kelpien outside of "Star Trek: Discovery" but we're willing to let that one go.

This episode makes you wonder about other members of alien races who defied their own culture to join a different society in other "Star Trek" series, such as Worf or Spock. It also resonates a little with the "Star Trek: The Next Generation" episode "Pen Pals" (Season 2, Episode 15) where Data wrestles with the moral dilemma of violating the Prime Directive or standing by while his friend, a young girl from a pre-warp civilization, faces imminent annihilation.

The "Short Treks" have got consistently better each month and this is the best so far…which makes us practically salivate with excitement at the final episode called "The Escape Artist." That episode stars the enigmatic, the charismatic, the mesmerizing and memorable, the one and the only Harcourt Fenton Mudd, played by Rainn Wilson, and airs on Jan. 3, 2019.

"Short Treks" is being shown in the U.S. on CBS All Access. In Canada, the episodes are available on the TV channel Space, the streaming service CraveTV, as well as the Snackable TV app. Sadly, however, fans in the U.K. will miss out as there are no plans for Netflix to show them at this point.