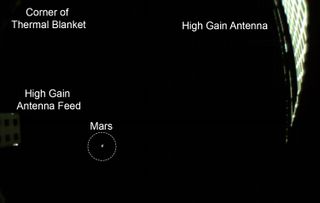 NASA's small MarCO-B cubesat took this photo of Mars from a distance of 310,000 miles on Nov. 24, 2018 ahead of the Nov. 26 landing of the InSight spacecraft. This annotated view shows the spacecraft parts visible.
(Image: © NASA/JPL-Caltech)

The cubesat, one of two Mars Cube One probes (called MarCO for short) snapped the Mars photo on Saturday (Nov. 24). That's two days before the InSight probe is due to land on the plains of Elysium Planitia Monday (Nov. 26) to study the interior of Mars.

"We are taking more pictures," MarCo-A mission manager Cody Colley told reporters in a press conference Sunday (Nov. 26). "The MarCOs use a very off-the-shelf camera, and we're learning as we go as we take those pictures." [NASA's InSight Mars Lander: Full Coverage]

This photo was taken by the MarCO-B cubesat, showing Mars from a distance of about 310,000 miles (500,000 kilometers), according to a NASA image description.

Scientists hope the MarCO cubesats can serve as a communications relay during InSight's landing on Mars, beaming telemetry from the lander back to Earth. Each MarCO probe is about the size of a briefcase and is equipped with an attitude control system that uses the compressed gas R236FA, which is commonly used in fire extinguishers. That prompted NASA scientists to nickname them "Wall-E" and "Eva" after the two robots who use a fire extinguisher to fly in space in Disney's animated film "Wall-E."

Unlike InSight, the MarCO probes won't stop at Mars. They'll fly by the Red Planet and continue on in the space between planets, NASA officials have said.