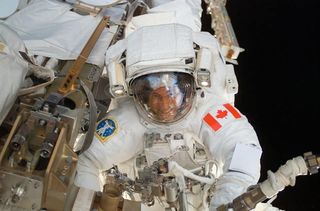 HOUSTON --Two astronauts will step outside the International Space Station (ISS) Saturdayon what will likely be a shortened spacewalk as NASA casts a wary eye towardHurricane Dean.

Clad intheir bulky NASA spacesuits, Endeavour shuttle astronaut Dave Williams and ISSflight engineer Clayton Anderson are scheduled to begin their orbital work atabout 10:01 a.m. EDT (1401 GMT). But they may cut short their planned6.5-hour spacewalk, which is aimed at priming the ISS for futureconstruction, in order to prepare Endeavour for an early departure from theorbital laboratory, NASA has said.

Theexcursion will mark the fourth extravehicular activity (EVA) of NASA'sSTS-118 mission to the space station.

"Dueto Hurricane Dean, and its potential impact to the Gulf Coast, we're workingtowards a plan that would land us a day early," NASA astronaut ShaneKimbrough told Endeavour's crew Friday from Mission Control here at the JohnsonSpace Center. "The way we're going to get there is to give up some [cargo]transfer activities tomorrow and possibly shorten EVA-4."

Endeavour'sSTS-118 crew is scheduled to return to Earth Wednesday, but the looming threatof Hurricane Dean to NASA's shuttle and ISS Mission Control centers at JSCprompted the agency to work towards a possibleTuesday landing. The space agency is hoping to preserve the option oflanding Endeavour early in case the hurricane forces the evacuation of MissionControl, which would then require NASA to transfer shuttle operations to abackup site at the Kennedy Space Center in Cape Canaveral, Florida.

As of lateFriday, Dean had winds of near 145 miles per hour (230 kph) and reachedcategory four hurricane status, according to the National Hurricane Center. Thestorm was expected to strengthen over the next 24 hours reach the Gulf ofMexico by Wednesday.

Spacestation flight controllers told astronauts aboard the ISS and Endeavour lateFriday that they would likely leave out extra and low priority tasks from thedocket of today's spacewalk. Once high priority tasks - such as installing ashuttle inspection boom stand to the ISS and securing an antenna mount - werecomplete, Anderson and Williams would be ordered back inside the space station,even if they were ahead of schedule, ISS spacecraft communicator LuciaMcCullough told the joint crews.

"Alright,well I think we can handle that," said STS-118 mission specialist TracyCaldwell, who will choreograph today's spacewalk from inside Endeavour.

NASA'sworries over Hurricane Dean came one day after the agency clearedits concerns over a small gouge in Endeavour's belly-mounted heat shield.The deep, 3 1/2-inch (nine-centimeter) long gash was caused by a 0.021-pound(about one-third of an ounce) piece of foam insulation during the shuttle'sAug. 8 launch, but later found not to pose a threat to the safe return ofEndeavour and its crew, NASA said.

Saturday'sspacewalk will mark the fourth and final excursion of NASA's STS-118 mission tocontinue assembly of the ISS. Mission managers added the extra spacewalk to themission after the success of a new powertransfer system that allows Endeavour to siphon electricity from the spacestation's solar arrays rather than relying on its own power supplies.

"Clayand I are really excited to go outside, we've got all our tools together,"Williams told reporters Friday, adding that the entire STS-118 spacewalkingteam has been a joy to work with. "It's just been an amazing team andexperience."

During thespacewalk, Anderson and Williams are expected to secure restraint bolts on anISS antenna mount to prepare them for additional work planned for NASA's nextshuttle flight in October.

Thespacewalkers are also slated to install attachment points for a sensor-ladenspace shuttle inspection boom used by NASA astronauts to scan their orbiter'sheat shield for signs of damage. The 50-foot (15-meter) inspection boom is tooheavy to ride aboard an upcoming shuttle flight next year that will haul amassive Japanese laboratory to the ISS. The new attachment points will allowastronauts to store an inspection boom at the space station for that comingflight to ensure its crew will be able to scan the orbiter, mission managershave said.

A wirelesssensor system antenna installation is also on the spacewalkers' task list, butplans to wrangle a few stubborn aluminum micrometeorite debris shields backinto place may be put on hold to end the spacewalk early in response toHurricane Dean.

Thespacewalk will mark the third for both Anderson and Williams. But for Williams,a veteran Canadian Space Agency astronaut, the excursion will set a newnational record for the most spacewalking time spent by a Canadian spaceflyer.He is going into today's excursion with 12 hours and 45 minutes across twospacewalks under his belt.

"Forme it's just a real thrill being part of this whole mission and getting achance to go outside and do three spacewalks," Williams said.