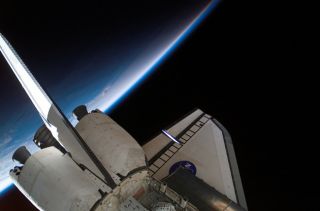 Backdropped by the blackness of space and Earth's horizon, Space Shuttle Endeavour's orbital maneuvering system (OMS) pods and vertical stabilizer are featured in this image photographed by a crewmember while docked with the International Space Station during STS-118 flight day six activities in August 2007.
(Image: © NASA.)

Endeavouris currently slated to land Wednesday after a 14-dayconstruction mission to the International Space Station (ISS), but the approachof Hurricane Dean has prompted concerns that affect NASA's Houston-basedshuttle and space station control centers here at the Johnson Space Center(JSC).

"We'dreally like to protect an option to end the mission on Tuesday," said NASAmission management chair LeRoy Cain late Friday.

For aTuesday landing, Endeavour astronauts would have to undock from the ISS lateSunday to complete their construction flight to the orbital laboratory.

Cain saidmission managers are also studying options to cut short a plannedSaturday spacewalk outside the ISS for Endeavour's STS-118 crew.

HurricaneDean is currently in the Caribbean Sea on course for the Yucatan Peninsula,with National Hurricane Center forecasts predicting its arrival in the Gulf ofMexico on Wednesday -- when Endeavour is slated to land -- and potentiallyimpact the Texas coast.

"Thecenter will have to make a decision in the mid-Sunday to mid-Monday on whetheror not to close," Cain said of JSC. But the decision to land Endeavourearly would have to be made well before that, he added.

Spacestation flight controllers, too, are reviewing their procedures should the hurricaneforce an evacuation of Houston and Mission Control. In September 2005, the NASAclosedits ISS Mission Control during Hurricane Rita, transferring primary controlof the station to its Russian Federal Space Agency mission operations center near Moscow, with a backup team of U.S.flight controllers primed outside Houston.

But NASAhopes none of those contingencies will be required, since its Mission Controlcenters in Houston are the best equipped to oversee spacecraft in Earth orbit.

"Ourobjective is really to get the mission completed, first and foremost, from herein Houston," Abbott said.

To preparefor a possible Tuesday landing, Cain said mission managers are preparing tocall up two additional landing sites for Endeavour in the event of an earlyreturn.

Supportteams are expected to ready NASA's backup shuttle landing sites at California'sEdwards Air Force Base and the White Sands Space Harbor in New Mexico for thepossibility of a Tuesday return for Endeavour, he added.

"It'sreally important that we keep our options open as long as it's practical,"Abbott said. "We've been watching this storm kind of brewing for a coupleof days and everyone has been aware that it's developing ? we need to beprepared to respond."